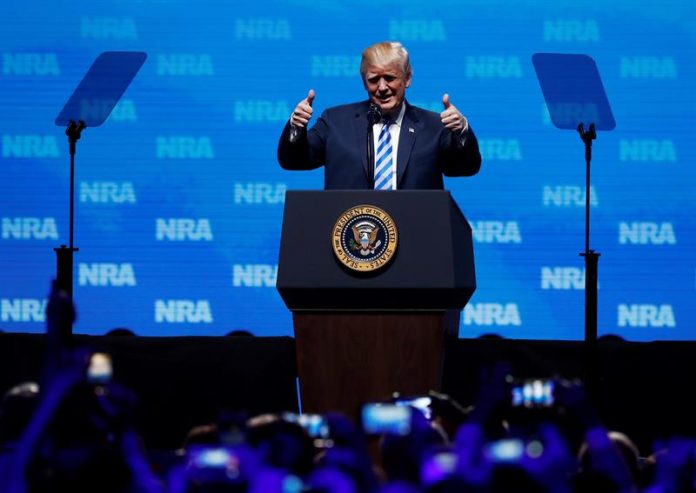 The president, Donald Trump, participated yesterday Saturday in the annual convention of the National Association of the Rifle (NRA, by its abbreviation in English), that is celebrated in Dallas (Texas), to whose members defined as “true patriots” and reinforced the defense of weapons as “a right of freedom”.

The president, before 80,000 members of the NRA, thanked his support “to the true American patriots” who defend the rights, freedom and the “great flag of the United States”, and that were one of the groups that supported him most in the 2016 elections.

Trump went for the second consecutive year to this appointment, after his presence last year in Atlanta (Georgia), made him the first US president to participate in this event since the former president number 40, Ronald Reagan (1981-1989).

While it is true that in recent times, after the dramatic killings that have occurred in the country, Trump has made certain threats to increase control over weapons, the president wanted to maintain his firm commitment to this powerful pressure group.

For this reason, one of the most repeated phrases by the New York mogul was his promise to protect the Second Amendment of the Constitution, which guarantees the right of citizens to own and carry loved ones, and which is the central theme of the 147th annual meeting of the National Rifle Association.

“Your Second Amendment rights are under siege, but they will never be under siege while I am your president,” he said.

Ironically, both in his speech and in the speech offered by the vice president, Mike Pence, attendees were barred from accessing the venue of the meeting, the Dallas Convention Center, a measure labeled as hypocritical by its detractors.

Outside the enclosure, in spite of the rain and the meteorological discomforts, numerous activists, among which students and relatives of the most recent massacre in Florida, protested the presence of the two highest political representatives of the country in the meeting. Annual NRA

The demonstrators, who came with posters that simulated tombstones or death certificates, or with messages against violence, plan to continue their marches on Saturday morning that will end with an act in front of Dallas City Hall.

Referring to the Parkland massacre, Trump insisted on his proposal to allow “highly educated teachers to carry hidden weapons” at work, since for him, declaring schools “weapons-free spaces” would attract “unbalanced” people .

“They (the teachers) love their students, and they’re not going to leave anyone hurting their students, but you have to give them an opportunity (to respond),” he remarked to the applause and expressions of happiness from his audience.

For his part, the vice president maintained his line of respecting the right to “defend their families,” adding with vehemence, to the applause of the crowd, that no one can “violate” said election.

Pence, aware of the audience, took a few moments to remember the police officer who died last week in a shooting in a commercial area of ​​Dallas.
“The United States always remembers its heroes, like agent Rogelio Santander, who sadly we lost last week, from here I say that they are heroes and they are in our hearts,” he said.

In the final part of his speech, he criticized the media for “worrying about tragedy and pain”, instead of focusing on what “could happen” in case of weapons being prohibited.

“American history shows that weapons in the hands of law-abiding people make our community safer, not the other way around,” said Pence.
In the act, along with Trump and Pence, were also present the Governor of Texas, the Republican Greg Abbott, and the conservative Senators Ted Cruz and John Cornyn.

The annual meeting of the NRA will continue until Sunday with conferences and debates, in addition to about 800 exhibitors who show all the news in devices, materials and accessories of the arms sector.