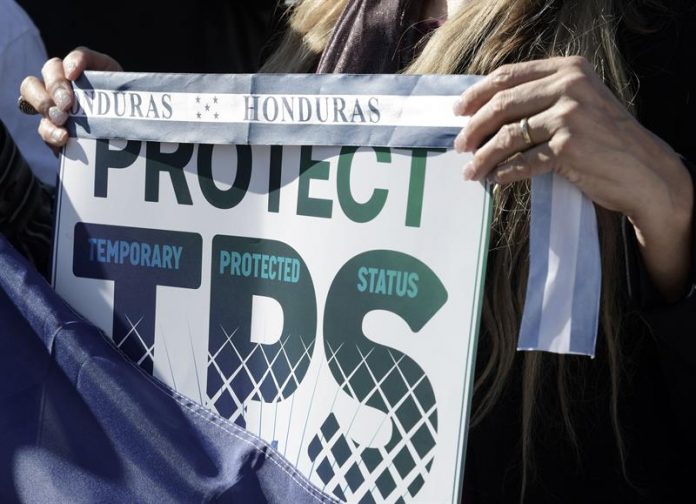 Donald Trump’s government snatched protection from Temporary Protected Status (TPS) to 55,000 Hondurans living in the country and gave them until January 2020 to return to their country or seek a way to regularize their immigration status.

In a statement, the Department of Homeland Security announced the end of the TPS that allowed thousands of Hondurans to reside and work in the United States, although the suspension will not be effective for 18 months, on January 5, 2020, to favor an “orderly transition”

The then president Bill Clinton (1993-2001) granted in 1999 the TPS to the Hondurans who were already in the United States due to the destruction caused by Hurricane Mitch.

The Department of Homeland Security has decided to end the TPS for Honduras after having assessed the conditions on the ground and having concluded that there is a “notable” improvement in the circumstances that led to its designation, the devastation of Hurricane Mitch, and, therefore, , you must end that permission.

The Secretary of National Security, Kirstjen Nielsen, has determined that the “interruption of living conditions in Honduras due to Hurricane Mitch that served as the basis for his designation of the TPS has diminished to such an extent that it should no longer be considered substantial,” he explained. the Government in its statement.

“As required by the applicable statute, the current designation of TPS must end,” concludes the Executive.

The government assured that it has made a “substantial progress in the recovery after the hurricane”, but did not specify what kind of improvements it was referring to.

Honduras continues to be one of the most violent countries in the world and is mired in political instability since last year’s elections, in which Juan Orlando Hernández won US recognition. as president-elect, although the OAS electoral observation mission determined that no victor could be recognized for the irregularities of the process.

The Government of Hernandez, an ally of Washington, got last November that the United States did not end the TPS, as happened with Nicaragua, and extended it until July 5.

In that way, the USA He had to communicate his decision on the future of the TPS for Honduras 60 days before it expired, so the deadline for that announcement was tomorrow, May 5.

The TPS does not open any way for permanent residence or any other status of immigration regulation, so that the Government’s decision forces its beneficiaries to return to Honduras, look for other means of residence or become undocumented, which opens the way for his deportation.

To continue protected by the TPS until its elimination in 2020, Hondurans will have to renew the permits that allow them to live and work in the United States in the coming months, although the deadline for this has not yet been opened, as detailed today by the Department of National security.

The Citizenship and Immigration Service (USCIS) estimates that, in total, some 86,000 Hondurans have benefited from the program since its inception in 1999, although the Honduran government estimates that, currently, 55,000 people remain covered by that permit. .

The TPS is a migration program created in 1990 with which the US grants permits in an extraordinary way to nationals of countries affected by armed conflicts or natural disasters.

For decades, the United States automatically renewed TPS for periods of 18 months, but Trump has decided to end those permits, arguing that they are temporary and it is up to Congress to pass a law to regularize the situation of its beneficiaries.

In the last six months, the Secretary of National Security, Kirstjen Nielsen, has ended the TPS for 195,000 Salvadorans, 50,000 Haitians and 9,000 Nepalese, groups that have given between 12 and 18 months to return to their country or prepare some way to change your immigration status.

The only country that has achieved an extension of the TPS is Syria, due to the persistence of the armed conflict.

With 55,000 beneficiaries, Honduras is the second country with the most protected by the TPS, below El Salvador, and more than half (63%) have lived in the United States for at least 20 years, according to a report by the Center for Studies. on Migration, a center of non-partisan thinking.

At that time, the “Tepesians” of Honduras have had 53,500 children who have US citizenship, according to data from the same center of thought. efe