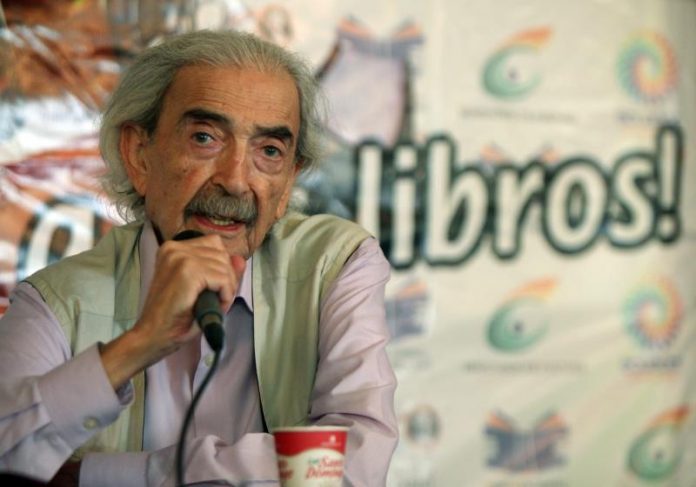 The writer Juan Gelman and the painter Carlos Alonso united them more than friendship. After the military dictatorship of their native Argentina, they had to deal with the disappearance of their respective children, and they did so largely in exile, another link that can now be explored in “Bajo la lluvia ajena”.

Edited by Libros del Zorro Rojo, “Bajo la lluvia ajena” is a mosaic of reflections on exile, absence and pain that Gelman (Buenos Aires, 1930 – Mexico City, 2014) wrote in 1980 during his exile in Rome.

Originally published in 1984, this chronicle that has the subtitle “Notes at the foot of a defeat” now accompanies the texts of its author with a collection of etchings that Alonso (Tunuyán, 1929) also made in Rome, and which have remained unpublished during 35 years.

Alonso, who also suffered persecution, attacks and the disappearance of his daughter Paloma, selected twelve works that “coincide with the intensity, feeling and depth that characterizes the text,” the editorial points out in a press release.

Thus, where Gelman writes “it is difficult to reconstruct what happened, the truth of memory struggles against the memory of truth”, Alonso shows an engraving in which a naked woman appears with her eyes covered by an outstretched hand.

And the painter accompanies with some feet, also naked, on a newspaper a text of the 2007 Cervantes Prize that concludes: “We dragged our feet in rivers of dried blood, souls that stuck to the earth for love, we do not want other worlds that the one of freedom (…) “.

These words were ripped from Gelman’s fist after four years without being able to write, as he had been unable to do so since 1976, when his son Marcelo and his daughter-in-law Maria Claudia, like many fellow poets and friends, were kidnapped and subsequently killed by the military repression of Argentina.

The tragedy marked the life of the poet, who turned in search of his granddaughter, also disappeared and given to the family of a policeman in Uruguay.

In 1997, the writer -whose work has deserved other awards such as Juan Rulfo (2000), Pablo Neruda or Reina Sofía (both in 2005) -, published “Neither the thin forgiveness of God” with his wife, Mara La Madrid, a volume that gathered testimonies of children of detainees or disappeared by the last Argentine dictatorship.

Gelman located his granddaughter Macarena in 2000 and in 2011 the Inter-American Court of Human Rights condemned the Uruguayan State for the disappearance of the poet’s daughter-in-law and for the suppression of her daughter’s identity.

Alonso, for his part, lived in exile in Rome and Madrid between 1976 and 1981, and since his return to Argentina, he has continued his work as a draftsman, painter and sculptor, showing his work in exhibitions in London, Madrid, Mexico, New York, Paris, Rome and Tokyo.

“Under the Rain of Others”, which Gelman and Alonso wove hand in hand after a meeting on March 5, 2009, forms a unique story about exile and discomfort, and is also the summit meeting of two key figures of Latin American culture . efe