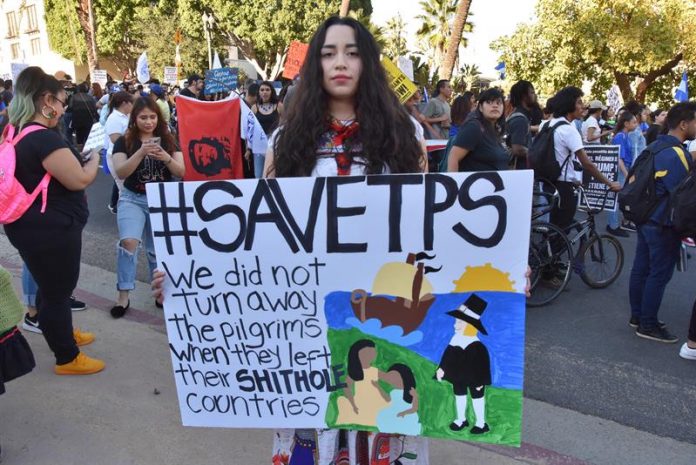 Determined to walk 700 miles (more than 1,100 km.) For “dignity and respect”, a group of activists today started a march from Aurora (Illinois) to Washington in order to demand permanent solutions for immigrants and protesting the militarization of the border with Mexico.

“At the cost of a great personal sacrifice, we want to represent our brothers and sisters who can not participate for fear of government reprisals,” Anglican minister José Landaverde, who organized and led the walk, told Efe.

He is accompanied by some 30 people who represent pro-immigrant groups, young people benefited with the Deferred Action (DACA) and community organizations of Illinois, which on the first day will walk 25 miles (40 km), from the city of Aurora to the border with Indiana, going through Chicago.

His compatriot, Karina Rodríguez, said that he participates in the march to protest the sending of troops from the National Guard to the southern border, because in his opinion “they are not prepared or trained to treat a citizen.”

According to reports, the plan is to walk 25 miles per day to complete the journey in about 35 days and reach the capital of the United States, where they will go to Congress to demand a legislative solution for the “dreamers”, as the young people benefited with DACA.

They also call for the restoration of Temporary Protected Status (TPS) for immigrants from the affected countries with the recent suspension of this benefit made by President Donald Trump.

The Salvadoran Mauro Navarro, benefited with the TPS and one of the walkers who hopes to reach the goal, asked Congress for respect to the “dignity of immigrants”.

In the case of El Salvador, the TPS was activated for the first time in March 2001 as a humanitarian response by the US government to the earthquakes of January 13 and February 13 of that year that hit the Central American country.

After the suspension of the TPS for Salvadorans, it is estimated that some 200,000 immigrants from that country are on the verge of deportation.

In his case, he takes medicines that will help him “take the step”, along with his fellow travelers who trust in the solidarity of the communities they will meet along the way.

“We do not do it just for ourselves, but for the benefit of future generations of immigrants,” said Landaverde, who organized a march similar to Cleveland (Ohio) in 2016, to protest during the National Convention of the Republican Party that elected Trump as Presidential candidate. efe