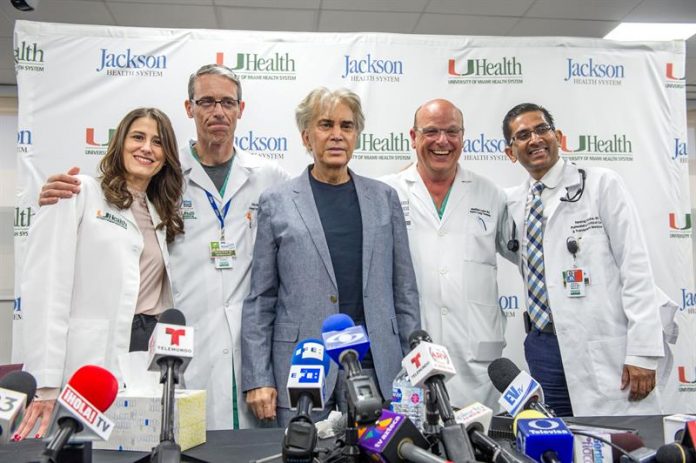 Venezuelan singer José Luis Rodríguez “El Puma” reappeared today in Miami four months after receiving a double lung transplant and announced that he is preparing a new album, a series about his life and that in a year he will return to the stage.

“The Puma will roar again,” said Rodríguez, 75, at a press conference along with the heads of the medical team of Jackson Memorial Hospital who operated on him last December and who today assured that the singer is “completely recovered” and that his return to the stage will be “when he decides”.

“I was born three times, first when my mother had me, then at 33 when I received Christ and now,” said the musician, who indicated that he has many plans and that once he feels completely recovered he will also work to help sick like him.

But the physical improvement is already remarkable. His skin tone and weight is much better than the one shown in May 2017, when he promoted his latest album, “Inmenso”.

Emotionally very grateful and fragile, on more than one occasion he had to dry his tears during the press conference, in which he was accompanied by his wife, Carolina, and in which he also had to close his eyes to maintain his composure.

“I lost a great fortune and I’m not talking about gold or silver, I’m talking about time,” he said in relation to the years he spent looking for a cure for pulmonary fibromatosis that he suffered since 2003.

He had a few months ahead of life when a donor compatible with him appeared. “It is terrible to die suffocated, it is exasperating, there is no explanation for that,” he recalled. 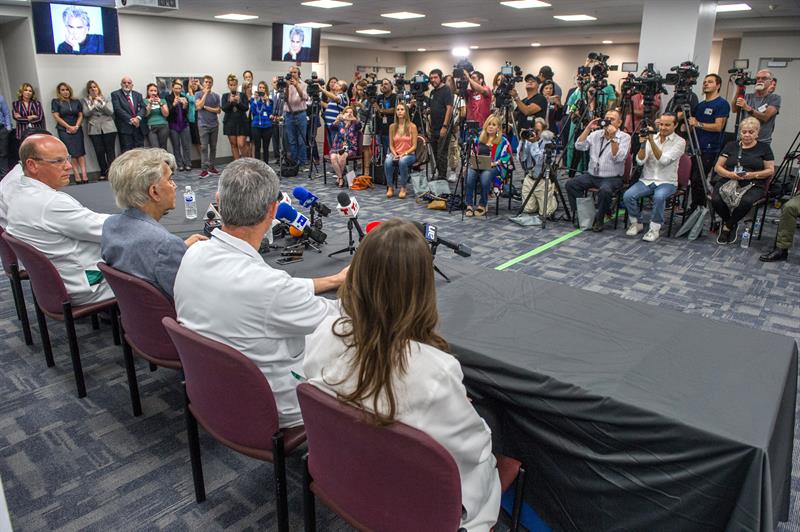 “I have gone through a lot,” said the Venezuelan, who urged patients of the same disease to accept that they have no other cure than a transplant. “I am going to help others, not doing it after having this opportunity would be perverse.”

The same word used to describe the government of Nicolás Maduro in his native Venezuela and, after asking his compatriots to “not lose faith,” he spoke of the tragedy suffered in his country by those who need organs and those who have already received a transplant. .

“There are no medicines,” he recalled the only time he raised his voice.
Rodriguez was raved in praise for his wife Carolina, “who has not separated from me now, or before,” when he could not even put on shoes by himself.

He also states that he has undergone a transformation. “I lost my ego, arrogance, arrogance,” he said.

What most seems to cost him in this new stage of his life is “patience”. “I was like the roadrunner,” he acknowledged. And, although his short-term goals are modest, such as “walking a little faster, having more energy,” he already has big plans.

He talked about a record project, collaborating a second time with Ricardo Montaner, the architect of his previous production and one of the people, with his wife Marlene, on the list that has helped him the most.

He also dreams of a tour in one year. “The doctors say that the recovery of this type of transplants takes between 10 and 12 months,” he said and from there the wait until April.

He wants to return to cities like Mexico, Bogotá and La Paz, which his pulmonary fibromatosis disease had forced him to avoid because of the height.

In addition, he revealed that a television project about his life is almost ready. “There was only the last chapter that is this,” he said. “You’re not going to hide anything.”

The doctors who operated on him, headed by Dr. Matthias Loebe, assured that he is completely recovered.

For his part, heart and lung transplant surgeon Nicolas Brozzi said that El Puma “has his voice intact”, although the singer admitted that he had not dared to even sing a note.