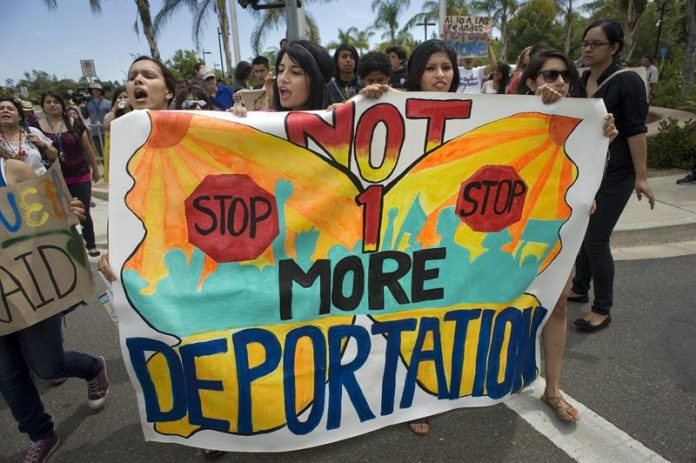 One hundred activists visited lawmakers at the state Capitol today in a lobbying effort to ensure California remains a “welcoming immigrant” state.

The activists, accompanied by immigrants, including families and undocumented youth, asked in Sacramento budgetary resources to help this community, to exclude the question of citizenship in the census and the Health for All program, among other issues they consider crucial.

“We want to tell legislators that we want California to remain a home state for immigrants and with a platform that protects and integrates immigrants,” he said in an interview with Efe Joseph Villela, director of Legislation of the Coalition for Human Rights. of the Immigrants (CHIRLA), organizer of the initiative.

The CHIRLA representative indicated that they want their “voice” to be taken into account, which “represents the immigrant not only from urban areas but from all of California.”

The activists asked lawmakers to approve more funds for nonprofits that provide legal aid services for undocumented immigrants at risk of deportation or provide assistance for those who can obtain citizenship.

Villela also stressed that his organization promotes laws that protect the undocumented against the raids.

Divided into a dozen groups, visitors were given the task of visiting as many legislators as possible, asking them to support budgetary measures that support the legal proposal Health for All, which last year was stalled in the Assembly for lack of a specific source of financing for its high cost.

“It’s a very busy day for us, but we are very encouraged to visit the legislators and present our ideas,” Donna, an activist from the Central Valley of California, told Efe.

In today’s visit they were also given to the members of the Legislature the so-called “Qualification Card”, which elaborated CHIRLA and which reflects how each legislator voted on nine bills that were studied last year on issues that They affect immigrants.

“There we registered the way in which each legislator voted on those measures, from the one that voted 100% in favor of them and the one who voted against, to remind legislators that we are paying attention to each of their votes,” Villela said. .

Another important issue that activists highlighted today was the question about citizenship that the Federal Administration wants to include in the 2020 census.

The representatives of the immigrants wish to avoid that this question is included, because the fear to give this information can lead to that people who do not reside legally in the country refrain from participating in the census.

“If your district is not 100% counted, it means that it will have fewer resources, regardless of whether you are a Democrat or a Republican, this affects us all,” Villela noted.

However, CHIRLA, like other organizations that defend immigrants, is preparing campaigns to reduce the fear among the undocumented population to encourage their participation in the census and that the results are as real as possible.

One of the important aspects of the census, which takes place every ten years, is that depending on the number of people in each district, federal funds are allocated for public services such as education, transportation and health.

Some, such as State Attorney Xavier Becerra, have warned that if a large part of the undocumented population residing in California is not included, the state could lose one or two seats in the federal Chamber.

The House of Representatives has 435 members that are distributed proportionally to the population of the 50 states of the country. efe