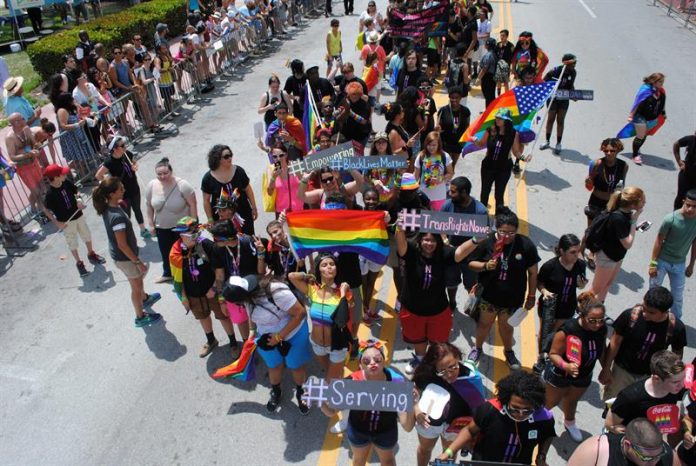 Four men who were wanted for the attack suffered on Sunday in Miami Beach by a gay couple and a passerby who tried to defend them were arrested today by the police, local media reported.

Police sources identified detainees such as Juan C. Lopez, Adonis Diaz, Pablo Reinaldo Romo and Luis M. Alonso. The first three are 21 years old and the third is 20.
For now they are charged with a felony to which the aggravating “hate crime” can be added if the Prosecutor’s Office so decides, according to local TV channel 10.

Last Sunday, after the celebration of the Gay Pride Parade in Miami Beach, Rene Chalarca and Dimitri Lugonov reported to the police that they were insulted and beaten by three men in a public park, when they were waiting to enter the toilets and embraced .

One of the assailants uttered an insult in Spanish against them and then he and two other men beat them, as they did with a man who interceded for them, who was thrown to the ground, according to Local 10 news channel.

The assault was witnessed by several people and recorded by the security cameras and the images disseminated so that whoever knew who the aggressors were would inform the police.

Chalarca and Lugonov, who claim that the assault was due to their condition as homosexuals, suffered cuts and bruises on their faces and were treated by paramedics in the same place.

Helmut Muller Estrada, the man who came to his defense, ran the worst fate and had to be taken to a hospital to be treated for his injuries.

“We were together, so, for me, it’s clear that it was a hate crime,” Chalarca said.

According to the NBC channel 6, Lugonov said that “probably” the aggressors were provoked because they were “walking hand in hand, it was gay pride and South Beach was full of gay people”.

The mayor of Mamia Beach, Dan Gelber, met today with representatives of the LGBT community to whom he assured them that the city had taken this “despicable” aggression very seriously.