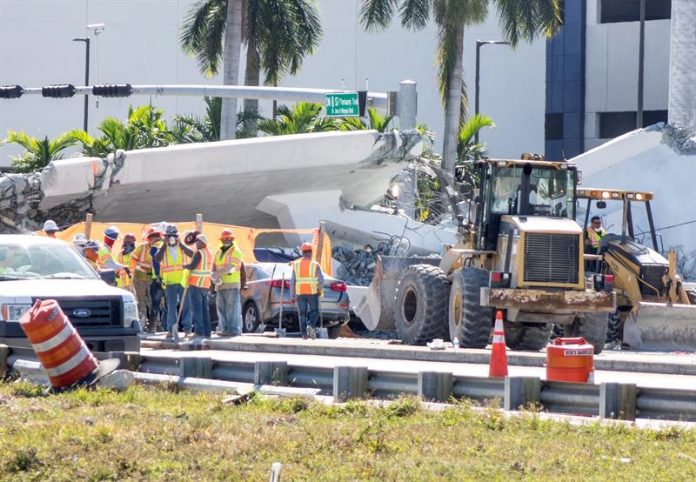 The International University of Florida (FIU) resumed classes on Monday suspended by the sinking last Thursday of a pedestrian bridge that caused the death of six people, all of them already identified, informed this institution.

The return to the classes of the students takes place while the investigations of the accident continue their course and already the first civil demand for the accident was presented.

Matt Morgan, an Orlando lawyer, told Local 10 News yesterday that he filed a lawsuit on behalf of a man who was riding his bicycle to work and was injured when the pedestrian bridge connecting an area of ​​the suburb of Sweetwater with the University Florida International (FIU) sank.

On the FIU campus, at 1:47 pm ET, the time when the collapse of the 950-ton, 174-foot-long pedestrian bridge collapsed, students and teachers held a minute of silence for the six dead people today. , one of them, Alexa Durán, student of that university.

“Although at the operational level on Monday it will be a regular day at FIU, life on campus (Modesto Maidique) will be far from normal, as a university community we remain saddened by the victims of the bridge accident,” the center said in a statement. released early today.

The president of FIU, Mark B. Rosenberg, today addressed a message to the students of the center in which he affirms that what happened has shaken the heart of the whole community and warns them that there will be “a lot of speculation” about the bridge collapse.

For this reason, clarifies that the university center “did not design or built” the catwalk and ensures that the center fully complied with all the “procedures and protocols” in relation to the work.

Rosenberg stressed that FIU is collaborating with the investigations of the National Transportation Safety Board (NTSB). and other agencies, whose purpose is to determine the causes of the accident and determine responsibilities.

At the same time, Florida Governor Rick Scott instructed the State Department of Transportation yesterday not to make more payments of the federal funds awarded to the construction of the bridge (more than 13.6 million dollars), until the NTSB conclude your investigation and you know with certainty the causes of the collapse.

The bridge that was to link the FIU with the suburb of Sweetwater, in the county of Miami-Dade, where more than 4,000 students live, suddenly collapsed last Thursday, burying numerous vehicles and their drivers under the concrete blocks.

Ten of those who were injured could be quickly transferred to the Kendall Regional Hospital, where one of them died shortly after entering.

This gateway, whose method of “accelerated construction” reduced with its novel technology, according to the FIU, the “potential risk to workers, vehicles and pedestrians”, was initiated to avoid the danger that involved for students to cross the eight lanes of the eight street.

The works of the project, its construction and installation were carried out by the firms MCM Construction and FIGG Bridge Design, now under the scrutiny of the authorities.

Last weekend, a FIGG engineer alerted an employee of the Florida Department of Transportation (FDT) of the existence of a crack in the platform, two days before it sank.

In the message, which was not heard until Friday, a day after the tragedy, the expert says that although “obviously” some repairs had to be made, “this did not compromise the structural integrity of the pedestrian bridge.

The FDT maintains that the FIU was responsible for this infrastructure project
The “responsibility to identify and address security issues and communicate them correctly was unique to the FIU design team,” says a department statement.

And he adds that “at no time during communications, (the firm) FIGG or any member of the FIU design team communicated any one vital safety problem” for people. (efeusa)