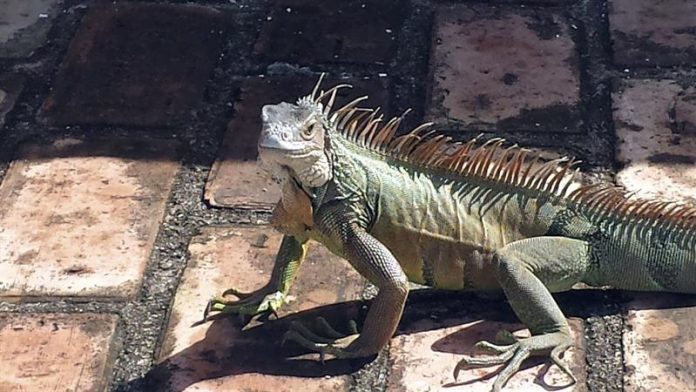 A plan to exterminate iguanas by hitting the head against fixed objects or with a kind of gun similar to that used with cattle is causing controversy in Florida, where it is believed that this invasive species came in the sixties.

Faced with the threat that these reptiles pose to wildlife and native plants, scientists from the University of Florida (UF) were commissioned by the Florida Fish and Wildlife Conservation Commission (FWC) to carry out a project to eliminate Iguanas for a cost of $ 63,000.

According to FWC, these reptiles can be a nuisance for owners by damaging plants and gardens, leaving droppings in patios and pools and causing property damage when digging burrows.

However, the stunning method used to kill up to 250 iguanas has been described as inhuman by some experts.

Veterinarian Susan Kelleher pointed out to the Sun Sentinel newspaper that the method of hitting the head is cruel, and in turn suggests sedatives and then euthanasia.

However, Jenny Ketterlin, UF biologist, explained that it is a more “humane” way to kill them.

Some “inhuman” ways to kill them are drowning, freezing without previous deep anesthesia and decapitation, because the brain of the reptile can remain active until a minute later, according to a university document.

Experts point out that the subtropical climate of central and southern Florida allows these large herbivorous lizards (which feed on plants) to survive, breed and become part of the Florida environment.

They point out that in Florida the common green iguana (Iguana iguana), the Mexican spiny-tailed iguanas (Ctenosaura pectinata) and the black spiny-tailed iguana (C. similis) have been established; The latter, when they are large, are often mistakenly identified as alligators due to the reduction of the spines and the dark color. efeusa