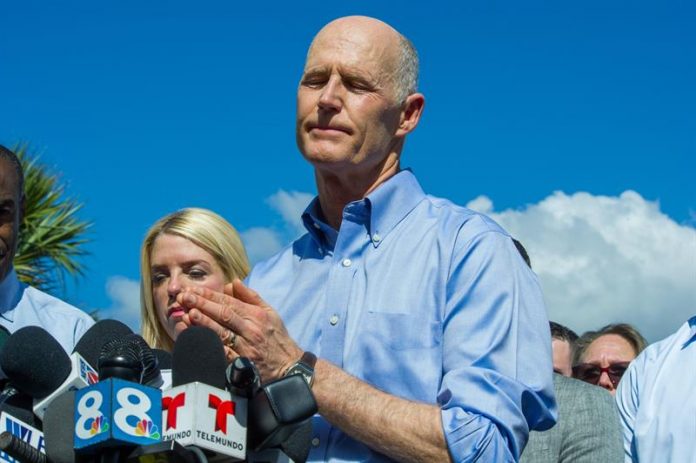 The angry social response to the Parkland massacre in southeastern Florida could be decisive in the decision of the state governor, Rick Scott, to give final approval or reject the new gun law approved by the State House on Wednesday. .

“The governor is carefully reviewing the law.” On Friday, before acting (in relation to the law), he will meet in Tallahassee with the families of the victims “of the killing, said Scott’s communications director John Tupps today. a message sent to Efe.

Scott had already made it clear that he was going to review “line by line” the new legislation of the House of Representatives that, among other provisions, raises from 18 to 21 years the minimum age to buy weapons in the state.

Another measure promoted by state legislators in response to the massacre perpetrated by Nikolas Cruz, aged 19, at the Marjory Stoneman Douglas institute in Parkland on February 14, authorizes teachers to carry guns in the center with certain restrictions. school.

However, the law does not include the prohibition of sale of assault rifles in the state, as numerous students and parents angrily claim.

Cruz, alumnus of this institute, from which he was expelled for disciplinary offenses, was declared after his arrest, confessed author of the shooting with an AR-15 assault rifle in which 17 people died, fourteen students and three professors.

Now, the approval of the law is in the hands of Republican Scott, although he has not yet advanced what his final decision will be.

The new gun control law, the first of its kind that reaches a governor of Florida in 22 years, wants to increase safety in schools and, for this, allocates a game of 400 million dollars to the project.

Approved in the lower house by 67 against 50 votes, the new regulations had received days before the approval in the Senate.

Scott has anticipated that he will make a resolution after consulting with the families and survivors of the Parkland massacre.

On February 27 the governor announced his own plan: an investment of 500 million dollars to increase safety in schools.

In addition, he was against the fact that school personnel can carry guns after receiving the appropriate police training.

Although the approval of the new norm can be considered as a challenge to the powerful National Rifle Association (NRA), there are many voices calling for greater restrictions on access to weapons, especially assault rifles, point that it is not included in the law.

In this context, the state Democratic Senator Gary Farmer today asked the governor to “exercise his veto authority” and convene a special session to address the issue of authorization to carry weapons within the centers, if, finally, “the legislation allows that civilians are armed in the presence of our children. ”

Although the provision that authorizes the carrying of weapons within schools imposes a series of restrictions, civil rights groups and community activists have also expressed, along with some legislators, their opposition to the rule, which could affect mainly Latino students and African-American

Derrick Johnson, president of the National Association for the Advancement of Colored People (NAACP), the country’s leading African-American association, called the idea of ​​arming teachers “irresponsible.”

Johnson hoped that Scott “is more responsible than the legislators who voted in favor of SB 2076.”

“Our concern is not only for African-Americans, but for all students who may be injured,” Johnson said, according to the CNN television network.

Democrats like Congressman Roy Hardemon fought unsuccessfully both in the Senate and in the (Republican-majority) House of Florida to eliminate this controversial rule of the new law.

The argument that its detractors wield is based on the fact that it is the minorities of students, often subject to levels of punishment superior to the white majority, the “most likely to be confused” with the attackers, so that “they could become targets” .

The plan of Scott establishes like priority that, instead of arming to part of the scholastic personnel, is disposed in the schools of a police agent by each thousand of students.

Cruz was charged Wednesday by a Grand Jury with 17 counts of first-degree murder and another 17 counts of attempted murder.

If found guilty, the youth could be sentenced to capital punishment.