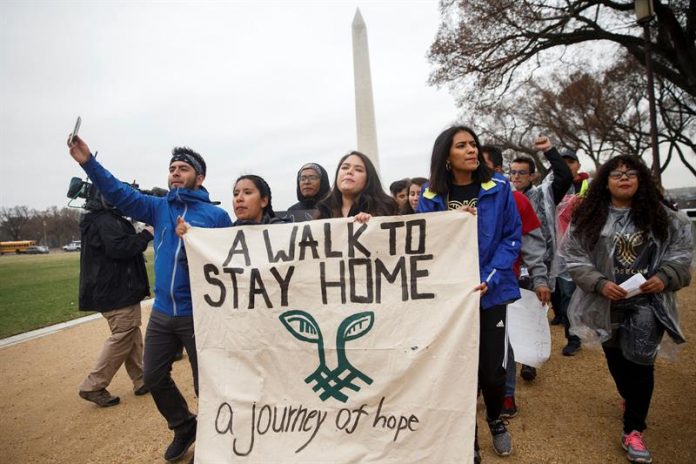 A group of “dreamers” toured the more than 400 kilometers (250 miles) that separate New York from Washington to symbolize the sacrifices that the undocumented community has to do to live in the US and demand a solution to regularize their situation in the country. .

Neither rain nor snow nor low temperatures prevented the eleven “dreamers”, representing the 11 million undocumented people residing in the country, arrived today in the country’s capital to expose their concerns and proposals in front of the downtown Washington.

Then they went to the Congress, where the authorities detained six of the participants in the “peaceful protest,” five of them undocumented who had also participated in the march, according to the organization.

During the trek, some of the members of the expedition, such as Costa Rican “dreamer” Fernanda Madrigal, suffered sprained ankles, a fact that made it even more epic to finish the tour.

“It has been tired: we have blisters on our feet, I hurt my ankle, some have had flu … But we have supported each other and with the people who helped us along the way,” he told Efe. Madrigal, a 26 year old girl living in San Diego (California).

The group of “dreamers” left New York on February 15 on a rainy day and crossed five states – New York, New Jersey, Pennsylvania, Delaware and Maryland – to reach the District of Columbia.

Along the route, marked by the low temperatures of the last days in the northeast coast of the country, the young people met several people who knew their initiative and who offered them lodging, food, drink and opportunity to clean themselves.

Once they arrived in Washington today, the undocumented youth asked the press for a “clean and permanent” solution to regularize their situation and not harm other people in the undocumented community.

“We ask Congress for a clean solution that does not hurt families anymore, that does not give more money to the Immigration Agency (Immigration and Customs Service) and that it does not (serve to) build this wall that Trump speaks so much about” , sentenced Efe Osvaldo Rodríguez, an undocumented Mexican who also walked for 15 days.

Rodriguez referred in this way to the four pillars that the president, Donald Trump, considers should include legislation to protect the “dreamers.” 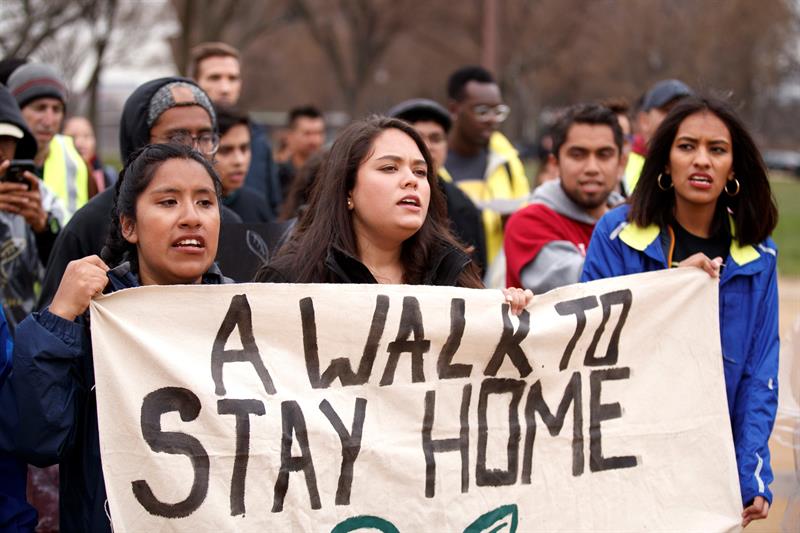 In January, Trump announced that he would only accept a replacement for the Deferred Action program (DACA) if it was conditioned on three other issues: funds for the construction of the wall with Mexico, the elimination of a lottery that draws visas to countries with low emigrant rates to the United States, and the imposition of obstacles to the family reunification of legal immigrants in the nation.

The “dreamers” who arrived in Washington today rejected this option and asked that they not be used as a bargaining chip to approve Trump’s anti-immigrant measures.

In this sense, the Mexican Bárbara Hernández, also member of the expedition, explained to Efe the symbolism of the eleven walkers who made this protest excursion.

“We chose eleven walkers to symbolize the eleven million undocumented people living in the US, including those who could not qualify for DACA, those who have been without papers for a long time,” said Hernández.

“We want respect, dignity and permanent protection,” added the native of Mexico City.

The eleven “dreamers” and several dozens of immigrant rights activists went to the US Supreme Court accompanied by undocumented youth born in Colombia, Mexico, Costa Rica and Honduras, among other countries.

Trump decided to eliminate last September 5 the DACA program, promulgated by former President Barack Obama and that protected from deportation to 690,000 undocumented youth who arrived in the country as children.

The president then gave until the next day 5 for Congress to find a solution to this situation of legal abandonment, a deadline that was knocked out by a decision that the Supreme Court took this week. efe