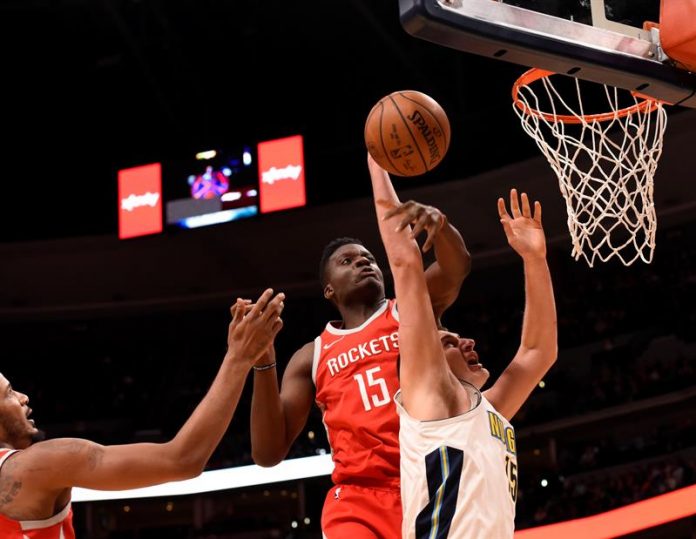 Nothing stops the Houston Rockets with leading star guard James Harden who one more day got the win and extended the winning streak to 12 consecutive games, the current best in the NBA.

The figure of Harden again shone in a special way in the attack of the Rockets to provide 41 points, eight rebounds and seven assists that led to the triumph at home 114-119 against the Nuggets of Denver.

The victory allowed the Rockets to consolidate their position as leaders of the Southwest Division, of the Western Conference and with the best record of the League (46-13).
The inspiration Harden encestadora, that when concluding the first part already had 27 points, had again the support of the base Chris Paul, that was decisive when maintaining the advantage of the Rockets when the Nuggets were put to only four so many of the tie and less three minutes to play.

Harden, the league’s MVP, has scored 40 or more points in nine games so far this season.
Paul eventually got 23 points, six assists and five rebounds, while Dominican forward Trevor Ariza reached 14 and was the third Rockets player to have double-digit numbers.

The Serbian center Nikola Jokic got a double-double of 21 points, 14 rebounds and eight assists as the most complete player of the Nuggets, who saw a broken streak of four consecutive wins.

Power forward LaMarcus Aldridge as the leader of the San Antonio Spurs’ balanced attack scored 27 points and helped the Texans win a 94-110 home victory against the Cleveland Cavaliers in an NBA championship match.

Along with the contribution of Aldridge, which also six rebounds and three assists, the guard Danny Green, who came out of reserve, became the sixth player and other key to the triumph of the Spurs to get 22 points.

The Spurs had lost six of seven games and four in a row, all outside their field, since the annual rodeo takes place at home.

The San Antonio team again traveled more than 10,000 kilometers on its traditional annual rodeo tour and left its mark at 90-41 since it began in 2003.

Five other Spurs players also had double-digit numbers, including guard Dejounte Murray, who started at Green and got 13 points, nine rebounds, five assists, recovered four balls and put three blocks that left him as The most complete player on the team.

The forward LeBron James returned to be the undisputed leader of the Cavaliers to be close to a new triple-double after providing 33 points, 13 rebounds and nine assists, which this time could not avoid the defeat of the Cleveland team, who lost the second match in the last three disputed.

The escort Bradley Beal led again the attack of the Wizards of Washington when contributing 24 points and they guided to the triumph of 109-94 that obtained before the Sixers of Philadelphia to which they broke streak to them of seven consecutive victories.

With their triumph, the Wizards put half a game ahead of the Indiana Pacers in the Eastern Conference standings and now occupy fourth place with a 35-25 mark.

The Wizards also remain at the head of the Southeast Division, four games ahead of the Miami Heat (31-29), who are second.

The eaves Otto Porter Junior, who left the starter, contributed 23 points to the attack of the Wizards, while reserve Kelly Oubre Junior came to 19, including 16 points in the first half.

Meanwhile, the Cameroonian center Joel Embid achieved a double-double of 25 points and 10 rebounds for the Philadelphia team, seventh in the Eastern Conference, which is looking for its eighth consecutive win.

Base Jrue Holiday scored 36 points, his best record so far this season, and the New Orleans Pelicans defeated at home, in overtime, 121-123 to the Milwaukee Bucks.

Holiday, who scored 28 points in the first half of the game, added nine rebounds and six assists.

For the Pelicans (33-26) it was their fifth consecutive victory, which secured them third in the Southwest Division and seventh in the Western Conference.

Power forward Anthony Davis managed a double-double of 27 points and 13 rebounds and veteran point guard Rajon Rondo also got another by contributing 16 points and 12 assists.

The Bucks were led by the guard Khris Middleton who reached 25 points, the Greek star forward Giannis Antetokounmpo and the base Eric Bledsoe added 20 points each.

Stellar center Dwight Howard contributed a double-double of 17 points and 12 rebounds that allowed the Charlotte Hornets to beat locals 114-98 to the Detroit Pistons in what was their fourth straight win.

Blake Griffin power forward. with 20 points, after scoring 10 of 18 field goals, he was the leader of the Pistons’ attack (28-31), who have lost five of the last six games.