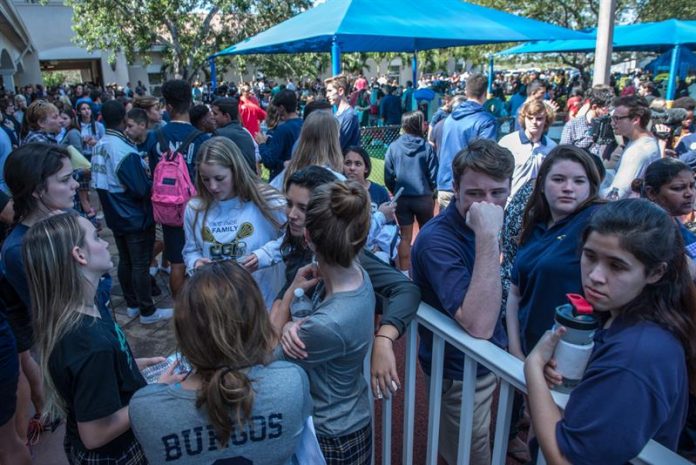 Hundreds of students and parents of Marjory Stoneman Douglas High School, in Parkland, Florida, returned to school today after the shooting that occurred on February 14 and left 17 people dead.

As it was a voluntary day of “reunification”, students and their parents returned to the school visibly moved, and many students collected belongings that were left to protect themselves from the attack committed by the author confessed to the killing, the former student of this school Nikolas Cruz .

Participants in the opening of doors had counselors at their disposal and were informed about the process of beginning classes, which will begin partially on Wednesday.

It is anticipated that classes will be resumed on a regular basis on March 5, although students whose classrooms were in the building where the shooting occurred will be relocated to other classes at the school, because the district’s education authorities do not plan reopen the property scenario of the event.

As reported by the school superintendent, Robert Runcie, his office is evaluating demolishing the building and building a memorial for the victims.

In the fence that surrounds the school, flowers, stuffed animals and messages of support for the victims have been accumulating for days, and today several neighbors returned to the place to deposit offerings and pray, according to the local newspaper Sun Sentinel.

Last Friday, the school opened its doors for teachers and staff of the high school, in what was a day of “comfort” and coordination with the direction of the secondary.

On February 14, the 19-year-old Nikolas Cruz entered this school armed with a semiautomatic rifle AR 15 and unleashed a shootout that left 14 students and 3 educators dead, in addition to at least 20 people injured.

Cruz is currently held in a Broward County jail without bail and faces 17 counts of murder.