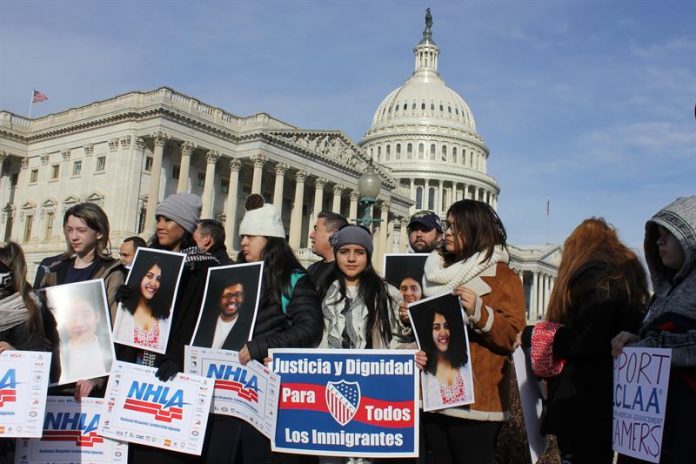 President Donald Trump again accused the Democrats of not acting to help undocumented youth, known as “dreamers” whose deportation protection program known as DACA will end on March 5 by order of the president.

“The Democrats are no longer talking about DACA!” Out of sight, out of mind, “they say DACA beneficiaries should not be happy. (The Democratic minority leader in the House of Representatives) Nancy Pelosi really He does not care about them, Republicans are ready to make a deal! “he said on his Twitter account.

Democrats and Republicans have negotiated for months to find a solution for the hundreds of thousands of young people who enjoy relief from deportation thanks to the DACA program, promoted by former President Barack Obama in 2012, and which Trump has ordered to end.

However, the various agreements reached in Congress in a bipartisan manner have not met Trump’s demands for border security, including funds for the construction of his promised wall on the border with Mexico.

The point of greatest friction is what conservatives call “chain migration,” that is, the right to family reunification.

Thus, the president wants to put an end to the possibility that undocumented youth can regularize their situation, and through their legal status can request the necessary papers so that their parents can stay in the United States legally.

The immigration debate has been overshadowed in recent days by the shooting in a secondary school in Florida, in which 17 people died and for which the discussion of gun control and armed violence in the country has been reopened.

Given the imminent date to end the protections of DACA, it is expected that in the coming days the congressmen seek a final attempt at agreement, despite the White House’s reluctance not to approve anything other than their immigration proposal.

Under Trump’s plan, more than 1.8 million young “dreamers” would be regularized, but “chain immigration” and the well-known visa lottery would end, in exchange for a “merit” based immigration system. (efeusa)