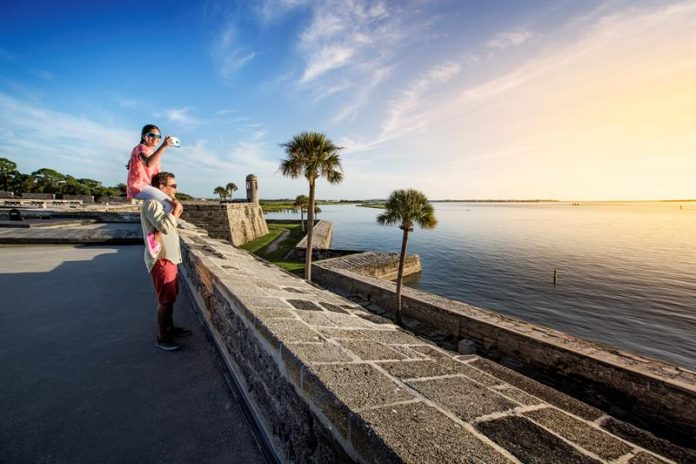 The tourist area of ​​northern Florida, which includes the oldest historical areas of the country, has launched a campaign to attract family tourism with a mix of sun, beach, culture and history around the city of San Agustin.

Looking ahead to the next Holy Week, the campaign presents San Agustín as one of the best destinations to travel with young children, pre-teens and teenagers with very cheap prices and activities that mix fun and rest with learning the history oldest in the United States.

San Agustin Bay is presided by the imposing San Marcos Castle, the oldest masonry fort in the USA. continental.

Built in 1672 with blocks made of coquina, it was the northernmost border post of the Spanish empire in the New World.

From San Marcos Avenue, walking south on St. George Street, begins a tour of the most emblematic monuments such as the oldest wooden school, which opened more than 200 years ago.

Here the children learn live how the daily life of the XVII century was.

San Agustín has Old Town trolleybuses and a Ripley’s tourist train that stops at more than 20 points around the city, stopping at the old jail and the Ripley’s Believe It or Not!

The historic tour of the city is complemented by a stop at an ice cream parlor until you reach the nearby Colonial Quarter, which shows what life was like in the oldest settlement in the country founded by the Spaniard Pedro Menéndez de Avilés in 1565.

Many of the restaurants serve authentic Spanish dishes, but the gastronomic offer is diverse as is Florida.

This entire area has 42 miles of coastline from the beaches of Ponte Vedra to Crescent Beach in the south that includes San Agustín beach.

To get in direct contact with nature, the Anastasia state park is recommended, which includes a rich ecosystem and abundant flora and fauna, and where you can rent kayaks, canoes and paddleboard.

For strong emotions, at the alligator farm and the zoo there are hundreds of animals as well as curious lemurs, colorful birds and gigantic turtles.

The historic coast of Florida has a long connection with piracy, an exciting subject for children. The St. Augustine Pirate and Treasure Museum has the largest collection of authentic pirate artifacts.

The “treasure hunt” of the museum, the entertaining guided tours by “pirates” and the battles on the high seas that are heard with surround sound complement the tourist activity designed for families.

The exhibitions of this museum allow interaction with treasure chests and cannons that really shoot and that show what was the rise of piracy in the Caribbean.

Another option for families is to make a tour designed specifically for children, which consists of a guided walk of 30 minutes through the historic streets of the city center during which they learn, for example, to use a spyglass or a compass like it was done by sailors and pirates.

At sundown the most recommended attraction is a replica of a Spanish galleon for 127 passengers where they present pirate shows.

Other activities include daily visits and wine tastings in a winery or the art walk on the first Friday of the month. (efeusa)