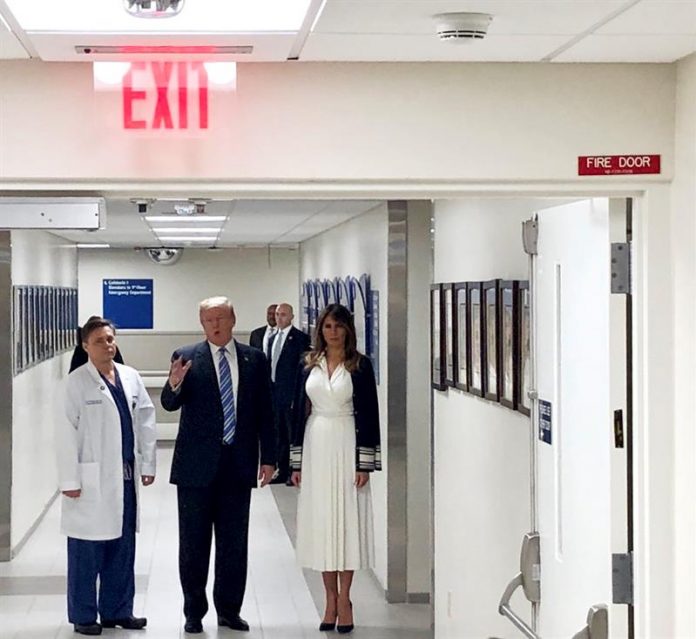 US President Donald Trump made a surprise visit to a hospital in Florida where the survivors of the shooting at Marjory Stoneman Douglas High School are hospitalized, in which 17 people died, and then held a meeting with the agents they responded to the attack.

The president and first lady, Melania Trump, visited the Broward Health North Hospital, located in Pompano Beach and one of the centers that received some injured from the massacre at the school located in Parkland, in a visit that had not been announced by the White House.

Photos released by the press team accompanying him show Trump and Melania walking through the corridors of the medical center, after visiting seven survivors of the attack who remain admitted to the hospital, in addition to thanking and congratulating the doctors for the “incredible work “What have they done to take care of the injured?

“It’s sad that something like that could happen,” the president said in relation to the killing in the brief statements he gave to the journalists accompanying him, while walking through the corridors of the hospital, guided by surgeon Igor Nichiporenko.

He also highlighted the “speed” in the response of medical personnel to attend the victims of the attack that began on Wednesday afternoon Nikolas Cruz, a 19-year-old boy with psychological problems and who was an alumnus of that educational center.

The presidential couple, accompanied by Florida Senator Marco Rubio, landed shortly before 18.00 local time (23.00 GMT), at the Palm Beach International Airport, and immediately the delegation went to the hospital, where they remained for about 30 minutes.

After that visit, the group moved to the city of Fort Lauderdale, where the headquarters of the Broward County Sheriff’s Office is located, and held a meeting there with the agents who responded to the attack.

The meeting was headed by the head of that unit, Scott Israel, and in addition to Rubio participated the governor of Florida, Rick Scott, and state prosecutor, Pam Bondi.

Around a circular table, and with satellite images of the school projected on two screens, the president acknowledged the officers’ efforts in the response and especially congratulated Officer Mike Leonard of the Coconut Creek Police Department.

The officer was the one who located and apprehended Cruz, to which the agent has not given greater importance, however the president suggested that he be less modest.
“That was so modest, I would have said it in a very different way,” joked Trump, laughing at the officers. “I would have said that without me they would never have found it,” he added.

In another moment, the president allowed himself another joke when he suggested an increase in salary to the officers who responded to the warning of the shooting, which also left 15 injured.

The White House had previously announced that Trump would travel to South Florida today, where he will spend the weekend with his family at his private club in Mar-a-Lago, located 60 kilometers north of Parkland, but never reported a specific date to visit the victims of the shooting.

“I’ll be leaving for Florida today to meet some of the bravest people on Earth – but whose lives have been totally shattered,” Trump said today on his Twitter account.

Tonight, the president said he planned to pay a visit to the survivors on Sunday or Monday, which is a holiday in the US, but then, after talking with Senator Rubio, decided to do so today when he arrived in South Florida.

Rubio said that the community of Parkland and the state live “a deep pain” these days and want “an action” so that “this does not happen again.”

In the meeting with the officers, Trump hailed the work of the Federal Bureau of Investigation (FBI), although this morning the agency acknowledged that he made a mistake by not following the appropriate protocols when he was alerted in January of the aggressive behavior of Nikolas. Cross.

“Good job, really good job,” the president told an agent of this federal agency present at the meeting with the officers. “We had a lot of FBI people here quickly, very good work, thank you very much,” he added.

Governor Scott, present at the meeting, had suggested hours before the FBI director, Christopher Wray, should resign for failing to investigate a clue that would have alerted the profile of the author of the massacre at the school in Florida.

In his congratulations to the police officers, Trump also said that the relatives of the injured are “very grateful” for the work of the troops.

Trump had previously planned to visit Florida this weekend to promote in the city of Orlando, in central Florida, his infrastructure plan, however later