Thousands of people gathered today in a vigil in memory of the 17 fatalities of the massacre perpetrated Wednesday by Nikolas Cruz at Marjory Stoneman Douglas High School in Parkland, Florida.

And thousands could not help but get excited. Both young and adults cried to tears alive to hear the testimony of the father of the 14-year-old girl Jamie Guttenberg, one of the deadly victims of the attack, who managed to speak thanks to the encouragement and phrases of support he received.

The father, Fred Guttenberg, explained excitedly that last year he lost a brother victim of cancer, a disease derived from the attacks of September 11, 2001. He thought then that the pain was unbearable, but indicated that what he has lived since the This Wednesday afternoon is infinitely worse.

“Jamie was the light of the party,” said the father, who regretted not remembering if he said goodbye to his daughter before she left for school and did not see her again.

That is why he said that children should understand that when their parents say no to all they want to do is to protect them and not suffer the pain of losing them, and the parents asked them not to lose a day without “hugging and kissing” your children and tell them that you love them.

Next to him, on the stage of the outdoor amphitheater of Pine Trails Park, one of the many parks that give this Floridian town its name, authorities and religious leaders asked for unity to face this tremendous tragedy. 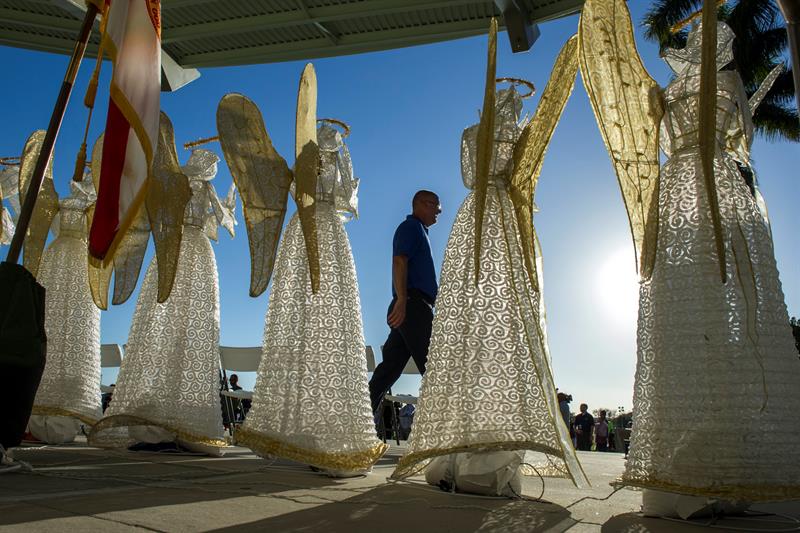 Presided by a dozen winged figures, next to the stand, the so-called “goodness plank” was placed, in which attendees wrote words of condolence and support, as well as messages such as “if the sun never fails and everyone gets up the days, we’ll get up too. ”

In this space there was also room for messages of political tone, such as “Enough is enough” or “NRA stops killing our children”, in reference to the National Rifle Association, the powerful pressure group in favor of arms and contrary to greater regulation of them in the US.

The experience in Parkland inevitably remitted today to what was recorded a year and a half after the massacre at the Pulse gay club in Orlando, also in Florida, where 49 people died.

Just as then, hundreds of people deposited flowers and candles in memory of the 17 victims on Thursday and there were also missing photographs of some of the deceased, such as Peter Wang, 15 years old.

If that July 2016 the rainbow flag became a symbol of memory to the victims, this Thursday the burgundy color, which characterizes the school, was the predominant in ties and shirts. It was also the one that Cruz used to go unnoticed when he entered the educational center and perpetrated his massacre.

The former president of the United States, Donald Trump, has promised this Saturday that the Republican Party will once again control the White House...

The US exceeds 26 million cases, although for the first time it has more vaccinated than COVID-19 infections

More than 26 million people have been infected with the coronavirus in the United States, which, after months immersed in the inoculation campaign to...

Pressing, counts the download Houston .- The inspirador encestadora of the escort James Harden returned to be protagonist in the day of dominical of...

Trump again shows his reluctance to order confinement in the US: “I leave it to the governors”

The President of the United States, Donald Trump, has shown again this Friday his reluctance to order a confinement in the entire North American...