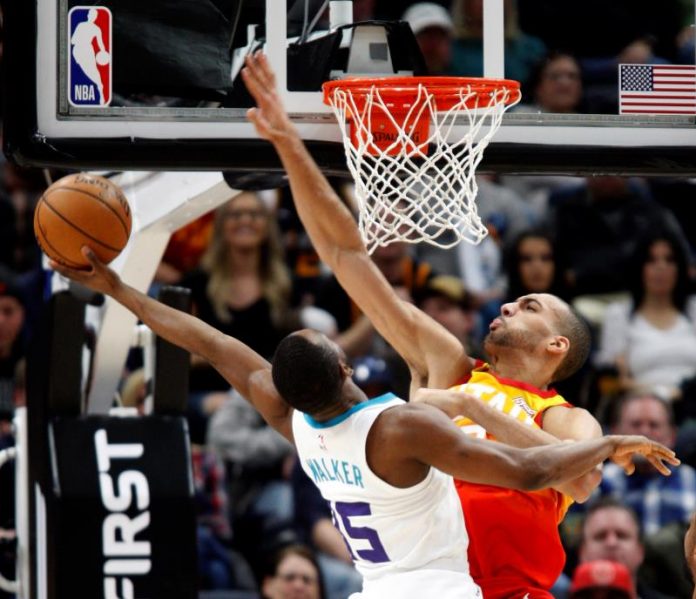 Another winning day of Utah Jazz and Houston Rockets extended their streaks to eight and seven consecutive wins, respectively, while veteran guard Dwyane Wade was greeted with a standing ovation by Heat supporters as he joined the team again. team and debut in the second stage of his career with a win.

The Damian Lillard base achieved 50 points in 29 minutes, the star forward contributed Lebron James contributed a triple-double winner and the Celtics lost for the first time the leadership of the Atlantic Division and best mark of the Eastern Conference.

Rookie guard Donovan Mitchell scored 25 points and the Jazz extended their winning streak to eight by defeating the Charlotte Hornets 106-94.
With their triumph, the Jazz have the best run in the competition and the widest in the Utah team since winning nine in a row in the 2010 season.

With Spanish baseman Ricky Rubio as top assistant (7 decisive passes), the Australian Joe Ingles added 23 points and the French center Rudy Gobert contributed a double-double of 20 points and 11 rebounds, which left him leader of the interior game of the Jazz (27-28), which are two wins out of eighth place in the Western Conference that the New Orleans Pelicans now occupy.

Guard James Harden and Swiss center Clint Capela became the explosive and winning combination of the Rockets that beat the Denver Nuggets 130-104 and secured the seventh consecutive victory.

Harden was in charge of leading the attack as maximum encestador to provide a double-double of 28 points, including five triples of 11 attempts, 11 assists and seven rebounds.

While Capela had a historic night to get another double-double of 23 points, 25 rebounds – better mark as a professional – and put two plugs.

Wade made a triumphant return to Miami after leaving the team of this city in 2016 and although he only scored three points in the debut his presence served as inspiration to his new teammates who beat the Bucks of Milwaukee 91-85 and broke the streak. of five consecutive defeats.

The former franchise player, 36, 13 with the Heat and three titles of league champions, changed the mood of his teammates and also in the stands of the American Airlines Arena in Miami that immediately increased the attendance of spectators.
Escort Tyler Johnson had 19 points and forward Josh Richardson added 16 as the Heat’s leading scorer (30-26).

Wade came off the bench to score three points with 1 of 6 field goals (1 of 1 triple), gave two assists and got a rebound in his first game since being acquired on Thursday in transfer with the Cleveland Cavaliers.

Greek forward Giannis Antetokounmpo scored 23 points, but he did not prevent his team from losing for the second time in nine games under interim coach Joe Prunty, but they lost all three games in the series this season against the Bucks.

Base Damian Lillard scored 50 points, his best season record, in the Portland Trail Blazers’ 100-118 victory over the Sacramento Kings.
Lillard, who scored 22 points in the third quarter, played 29 minutes, scored 16 of 26 field goals, including 8 of 13 triples, and was perfect in the personnel with 10 of 10.

The base achieved 50 points at the end of the third quarter and had the opportunity to rest during the last period.

Lillard joined his teammate the guard C.J. McCollum and Harden are the only ones to score 50 points in three quarters so far this season.

James regained his status as leader and complete player by contributing a triple-double and the Cavaliers beat visitors 107-123 to the Atlanta Hawks.

The victory was achieved by the Cavaliers although they had only nine players available after Thursday, they went on to six and the four new players that have to arrive in their place are still not available although they did accompany the team.

Newcomers to the team, George Hill, Jordan Clarkson, Larry Nance Jr. and Rodney Hood, remained in the locker room during the game and are expected to make their debuts against the Boston Celtics on Sunday.

James before the lack of players grew in his individual game against the team with the worst record in the league and contributed 22 points, 12 rebounds and 17 assists in 41 minutes of action.

Reserve guard Kyle Korver led the Cavaliers with 30 points, his best record of the season, including four consecutive triples to close the third quarter.

Escort Victor Oladipo scored 35 points in the Indiana Pacers ’91-97 home win over the Celtics in an Eastern Conference winners’ match, and broke a five-game losing streak in previous meetings.

Reserve guard Lou Williams scored 26 points and the Los Angeles Clippers beat their former power forward, Blake Griffin, and gave them their first loss when they beat the Detroit Pistons 95-108, their new team.

Griffin finished with 19 points. Detroit had won five consecutive games, having Griffin in four of those games. In other results of the day, Philadelphia beat 100-82 to New Orleans, Chicago 114-113 to Minnesota.