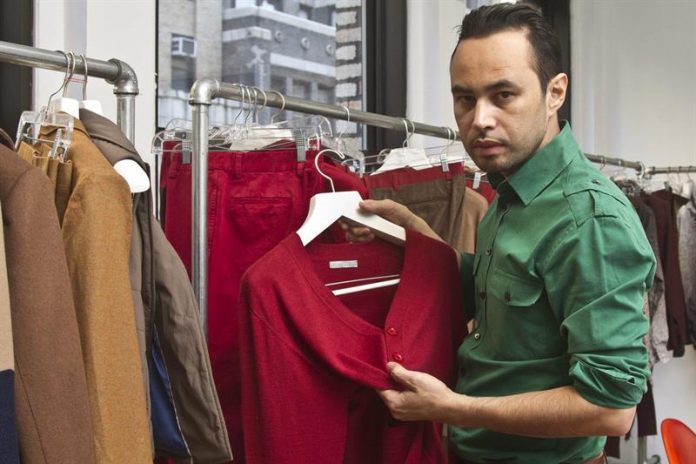 The Honduran designer Carlos Campos today paid tribute to the late Mexican singer Juan Gabriel with a collection inspired by the different styles of the distinctive costumes that Divo de Juárez used on stage throughout his career.

Very long jackets and coats with wide lapels and elongated necks of the ’70 when he began to sing and with retro lines, some with short and long layers on the shoulders, a piece that was not missing in the wardrobe of the Mexican icon, and other aviator type oversize and with different details.

Also pants of wide leg and high waist of the ’80s, some with folds and others more fitted, shirts with large pockets and pointed collar, as well as boots inspired by the boots of the mariachis, in black patent leather, as well as in blue and white, made by artisans in Mexico, starred in the collection of Fields for Men, at the Fashion Week in New York.

“With this collection we wanted to reinterpret the spirit that this singer had from the beginning of his career until the end.” The idea comes from an image of Juan Gabriel wearing a purple jacket and I found it fascinating, “the designer told Efe.

Campos reinterpreted the style of Alberto Aguilera Valadez, who became famous as Juan Gabriel, who died in August 2016, and printed his stamp, characterized by a construction of tailor’s pieces and finishes that he learned from his father in Honduras, to modernize the clothes

The Mexican singer liked to wear sequins and shine in his clothes and for this, Campos chose to use satin silk to give that touch that so distinguished his wardrobe.

To pay tribute to one of his favorite artists, whose music he always hears in his workshop, he used wool, cotton and silk. Inspired by the famous song Noa Noa, which bears the name of the club where Juan Gabriel began his career, the designer designed a pattern of lines that merged with the face of the famous artist.

“I call this collection the spirit of Juan Gabriel because he does not try to duplicate his dress but if he was alive and he was 25 or 27 years old, how would he dress,” said Campos, one of the Latinos who has made a name for himself in competed fashion industry.

Among the models, who paraded while listening to music by Juan Gabriel who have recorded several artists, there were four women because according to Campos “Juan Gabriel empowered many women”.

“That’s why I wanted to have them wear men’s clothes, I think it would be the women I would have by their side if I walked with them,” he said, adding that he had long wanted to pay tribute to the star. (efeusa)