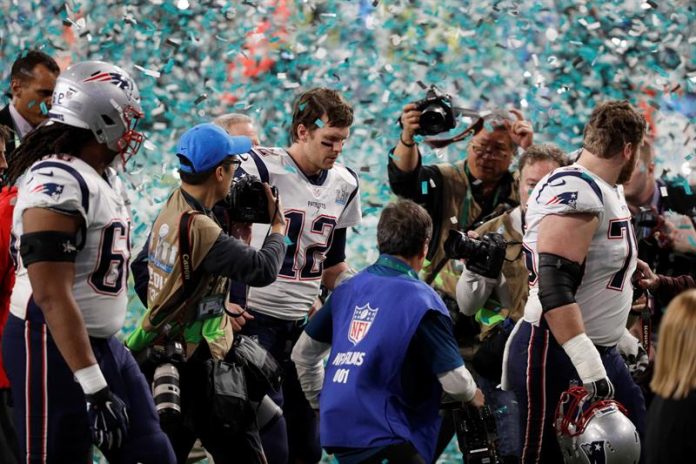 Legendary quarterback Tom Brady admitted that within the team and in his own person there was “frustration” at the way they lost the game of the 52nd Super Bowl of the National Football League (NFL) to the Eagles of Philadelphia (41 -33).

But he acknowledged that it was not the time to draw more conclusions than to turn the page, congratulate the new champions and move on.

“It’s hardly been minutes since we lost the match and therefore you can not talk about what my future will be, although of course I’ll have to analyze the whole situation,” Brady said. “But at the end of the road I do not see why I could not play again what will be my nineteenth season as a professional.”

During the Eagles game, Brady did his job by completing 28 of 48 passes for 505 yards, including three touchdowns, without interceptions, and leaving the passer rating at 115.4.

Brady’s 505-yard, 40-year-old, active since the 2000 season, was the most thrown in history in a playoff game, but he was on the verge of achieving what would have been his sixth trophy Vince Lombardi .

“I think that in the second half we made things better and when we put ourselves ahead in the score (33-32) it was the moment that we did not take advantage of by making a better defense that would have allowed us to play with more tranquility in the offense,” Brady. “But the whole team fought and we tried to a rival that the final was better than us.”

Brady’s defeat, which the night before had been chosen as the winner of his third MVP in the league, kept the curse of not being able to win a Super Bowl despite having been a leader in the regular season .

Since the first Super Bowl, no quarterback leading league pin in the regular season has managed to become champion.

Brady, who was the big favorite to get it, has lost the Super Bowl twice after leading the league in passing yards during the regular season.

He suffered the first loss in Super Bowl XLII, after the 2007 season when he also received his first MVP award, after the Patriots lost 17-14 to the New York Giants.

“I did not worry about the marks or being the first, the only thing I was focused on was helping my team to get the victory that in the end we were not given for details and precise moves we did not know how to execute,” said Brady.

Before the frustrations of Brady, considered the best quarterback of all time, the first to suffer them was another legendary, as Dan Marino, who threw for 5,084 yards in the 1984 season, but his team the Miami Dolphins lost by 38-16 against the San Francisco 49ers in Super Bowl XIX, with Joe Montana as leader.

After almost two decades, the turn of frustration came to Kurt Warner who was looking for the feat in Super Bowl XXXVI after throwing for 4,830 yards in the 2001 season, but his team of the San Luis Rams were surprised and lost 17-10 before the own Patrios with Brady to the front.

The following year, Rich Gannon finished the regular season with 4,689 yards with the Oakland Raiders, who were also defeated by beating 48-21 against the Tampa Bay Buccaneers in Super Bowl XXXVII.

Then came Brady’s first chance in 2007 that he felt in his own flesh the frustration of not being proclaimed champion of Super Bowl XLII.

Another legendary Peyton Manning, who twice won the Super Bowl, tried it in 2013, but his 5,477 yards in the regular season did not prevent the humiliation of his Denver Broncos team by beating the Seahawks 43-8 Seattle in Super Bowl XLVIII.

Now Brady also joined Manning as the second MVP of the NFL to lose twice the Super Bowl after being awarded.

Manning fell in the XLIV and XLVIII editions while Brady went through the same in Super Bowls XLII and LII.

Apart from the frustration and not to enlarge even more his legend, Brady reiterated before leaving the press room of the U.S. Bank Stadium, that the defeat suffered by very “frustrating” and “painful” that it was not going away so easily from his true passion for the sport of American football, which has also turned into true religion the permanent quest for success.