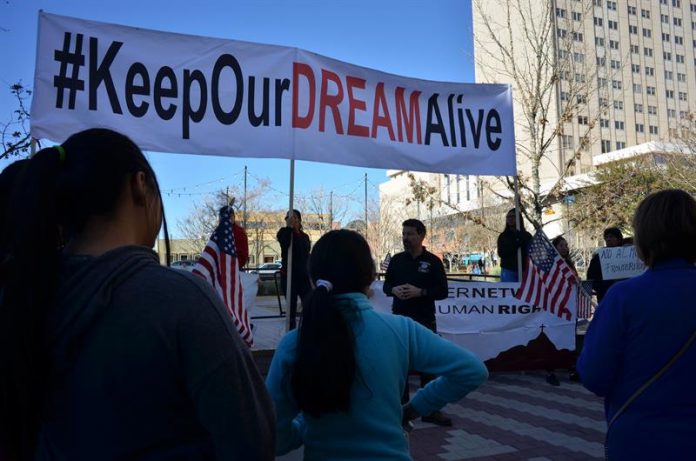 The US president, Donald Trump, proposed to Congress today an immigration reform that would allow access to citizenship to 1.8 million undocumented immigrants who arrived in the United States. of children in exchange for 25,000 million dollars to build the wall and strengthen border security.

The figure of 1.8 million immigrants is higher than the 690,000 young people, known as “dreamers” or “dreamers”, who are currently able to work and are protected from deportation by the DACA (Deferred Action for Childhood Arrivals) program. , which expires in March by order of Trump.

According to senior White House officials, Trump has asked Congress to pass a law that allows “dreamers” to access citizenship in about ten or twelve years if they meet certain requirements, such as having a job, education and “a good moral behavior. ”

In return, Congress has demanded 25,000 million dollars to build the border wall with Mexico, implement “improvements” on the border with Canada and reform the checkpoints, which regulate the traffic of people and goods, according to these sources.

The president also calls for the end of the so-called “visa lottery for diversity”, which randomly assigns up to 50,000 visas a year for citizens of nations that traditionally have low rates of migration to the United States, especially African countries.

In this regard, Trump proposes to eliminate the lottery, but assign those 50,000 visas to highly qualified workers and families.

The president, in addition, asks Congress to end the current system of family reunification, known by its detractors as “migration in a chain” and that allows US citizens to ask for the permanent resident card (“green card”) for their relatives in abroad.

Specifically, Trump asks to give priority to the “nuclear family”, so that American citizens can claim only their spouses and minor children who live abroad but not their children of legal age and parents, relatives to them. that now they can help to live in the USA

Also, Trump wants Congress to expressly deport all immigrants who cross the border irregularly regardless of their country of origin.

Currently, only immigrants from Mexico and Canada can be expelled expressly.

The White House has described Trump’s plan as a “compromise” to reach an agreement in Congress, where Republicans have a majority, but Democrats have enough votes to block proposals and, as happened last week, force an administrative shutdown .

“It is a difficult compromise, to solve the DACA problem while at the same time it is about moving forward with immigration reform and ensuring national security,” said a senior White House official, who asked for the national security during a call with the press. anonymity.

In this way, the White House hopes that the Senate can vote on an immigration law during the second week of February, days before February 8, when the budget law that finances the Administration expires.

Many Democratic and Republican lawmakers have warned that they will not support a budget spending bill if an immigration pact is not reached before.

The White House proposal has been welcomed by some moderate Republicans, such as Lindsey Graham, who is part of the bipartisan group of senators trying to reach an immigration agreement that satisfies Trump and can be approved in Congress.

“President Obama tried and he could not fix the immigration, President Bush tried and could not, I think President Trump will be able, there can be a tomorrow for the DACA beneficiaries,” Graham said on Twitter, who ended the tag: “# TRUMPDreamers”.

However, the leader of House Democrats, Nancy Pelosi, called Trump’s plan “an act of extreme cowardice that tries to keep the ‘dreamers’ hostage to an odious anti-immigrant scheme.”

Pelosi also warned that “the dreamers will not be sold in exchange for a racist agenda.”

Before Pelosi, Trump’s plan had already reaped the rejection of the most progressive wing of the Democrats, including Senator Elizabeth Warren, and of Hispanic legislators, such as the president of the Hispanic Caucus of Congress, Michelle Lujan Grisham.

“We can not allow the lives of young people who have done everything right to be used as currency for anti-immigrant policies,” Lujan Grisham said in a statement.