Concomitantly, the journalism agency inaugurated its new offices for the first time located at 4471 NW of 36th street in Miami Spring.

Miami Spring, Florida.- Diverse personalities of public life in Florida, applauded the release of the first radio program of the Dominican College of Journalists, CDP, “La Voz del CDP en FL”, which airs every Saturday through 101.9 FM and 1450AM of Radio TV Miami, which airs from 4:00 p.m. to 5:00 p.m. (local time).

The radio space is headed by the president of the schoolgirl branch, journalist Marcos A. Tejeda and also composed of Jesus M. Rojas, Rose Mary Santana, Ana Lucia Ortega, Ruben Morillo, while with Saturday segments will also have the participation of the communicator Matti Frías, president of the Tourist Press Association of the Dominican Republic, subsidiary Florida, the former president of the union in New York, Mayra La Paz, as well as the different branch offices abroad and in the Dominican nation.

“Among other objectives this means of dissemination of the CDP, we seek to be a support entity for the support of democracy, Freedom of Press and Expression in the countries of the Region, as well as an information mechanism with the objectivity that should characterize everything good journalist”, affirm the radio team.

Professor Adriano de la Cruz, speaking through the executive director of the CDP, the journalist and lawyer David Lorenzo, “congratulated the members of the organization, wishing him success in the development of the space”, besides noting that “they were extremely proud of the CDP Executive Committee in Florida”.

Similarly, Juan Carlos Bisonó, who chairs the Institute of Forecasting and Protection of Journalists, IPPP, said by telephone that he was “pleasantly satisfied with the work and decision making of the CDP subsidiary. Our best wishes to all of you colleagues and count on our support in everything, “said Bisonó.

Distinguished personalities met in the study to express their approval of the initiative of the CDP. Among them, the vice-consul Bernardo Martínez, representing Consul General Miguel Angel Rodríguez, who could not be present since he is in the Dominican Republic developing some programs with foreign investors, said that “for the Consulate General of the Dominican Republic it was a source of pride and satisfaction with the initiative of the members of the Dominican College of Journalists, CDP, under the understanding that this further strengthens the Dominican diaspora.”

Meanwhile, the renowned Venezuelan artists Edward Mena and Ricardo Malfatti, who delighted the audience by interpreting fragments of two beautiful songs, said “they are very happy that the journalistic guild has taken this initiative that becomes an authoritative voice at the service of the Hispanic community in general. Congratulations on behalf of the Venezuelan Diaspora to all, “they said.

Venezuelan professors of great value such as Aurora and Ana Aurora Saavedra, decided to accompany the cedepeístas in their project. Professor Aurora, making use of the microphone of the radio waves, as a mental health specialist, made an emotional call for journalists to “manage their stress levels”, remembering that this “harms their health and alters the rhythm” of life.”

While also among the visitors was the presence of a commission of Juan Herrera, municipality of San Juan de la Maguana, place where prominent Dominican professionals of journalism have come from. The commission was integrated by the recognized officer who worked in the Miami Police, José Mercedes and who congratulated the team of professionals of the program. 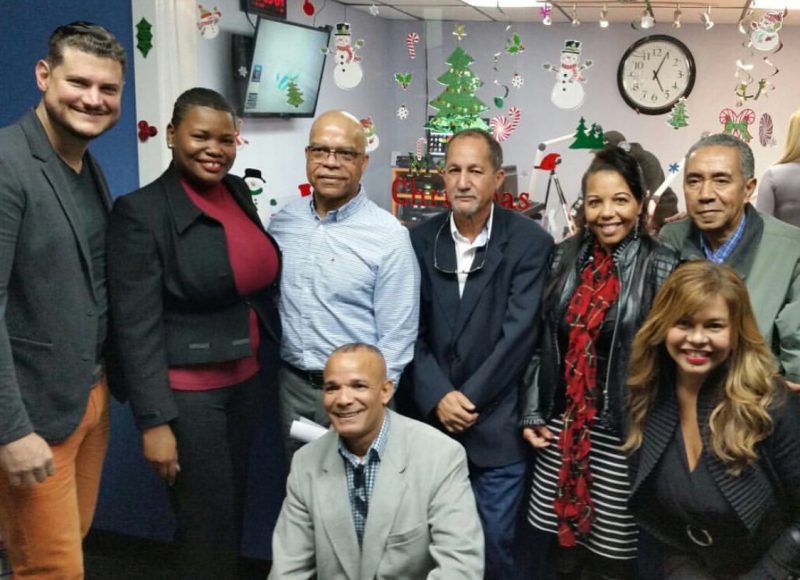 One of the most moving moments during the transmission of the radio space, were the calls from the City of New York, the president of that schoolgirl affiliate, journalist Ana Pereyra and the branch of Santiago de los Caballeros, Angela Genao, from Venezuela , the director of www.miamidiario.com, Marianela Méndez, who expressed their “rejoicing with the radio project. You have the full assurance that you can count on our support in this valuable project that rejoices all the members of the CDP in its different branches”.

Rodolfo R. Pou, renowned Dominican architect and businessman, who was present at the event, congratulated the radio team for the airing of “La Voz del CDP en FL.” He affirmed that “as we grow in different areas, we are strengthening our communities and that therefore helps us to develop more in the United States”.

For their part, the members of the Executive Committee of the Dominican College of Journalists, CDP in Florida, expressed their gratitude to “all the Hispanic personalities who gathered at the two events, where the new offices were opened and in the radio booth, the guild program”.

“We are also grateful to Leonel Peña, for his collaboration in making this initiative possible, as well as to each of the members of the CDP,” said Tejeda, who was accompanied by his wife Dennis García Tejeda and their children.

Among the guests also participated the Dominican athlete Virginia Echavarría, Triathlon champion, who will participate in the National Games of the Dominican Republic in Florida to be held on January 26 of this year. Also present were vice-consul Damaris Díaz, businessmen Ada, Juan José and Steven Espinal from ADEC Construction, Matti Frías who traveled from Orlando, Fernando and María Esther Valck, the latter from the Teatro Las Mascaras Foundation in the Dominican Republic, as well as Raymundo Mercedes, who expressed great joy for the radio project.

This Saturday among the interviewed are some relevant personalities of the artistic world, as well as a reputed immigration lawyer, who will discuss aspects related to the suspension of the TPS for some Salvadoran citizens, Haitians and others.

The Colombians Shakira and Maluma won the most nominations for the Latin American Music Awards, which will be presented on October 26 at the...

Thousands of people protest the “inhuman” treatment of detained migrants

Thousands of people joined more than 180 protests across the country Tuesday to demand the closure of immigrant detention centers and cancel the delivery...

The Texas-based bullet train company, which will join the cities of Dallas and Houston in a one-and-a-half-hour journey from 2023, announced today that two...