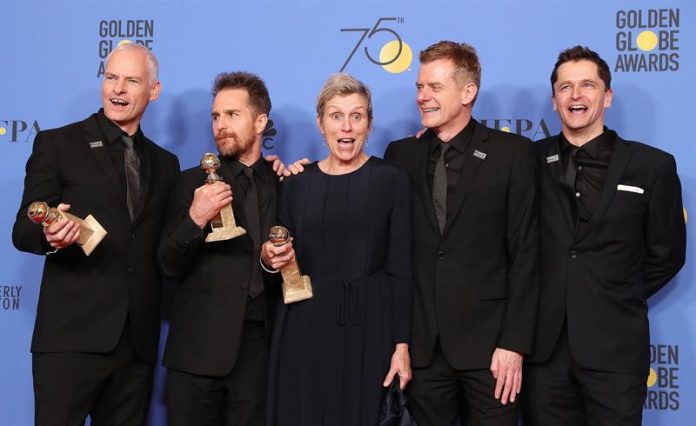 “Three Billboards Outside Ebbing, Missouri” was the star of the 75th edition of the Golden Globes with four awards, snatching the shine to “The Shape of Water”, which nevertheless won the award for best director for the Mexican Guillermo del Toro.

McDormand, a female variant of John Wayne in the film, added to the vindictive feeling of the evening and appeared on stage with several demands: “The women in this room are not here for the food, we are here for the job.”

Rockwell, excited, recalled his profile as an independent artist.

“The Shape of Water”, which started as a favorite with seven nominations, was satisfied with the awards for best director and the best soundtrack (Alexandre Desplat).

The film tells the story of love between a mute woman and a sea creature in the United States in 1962 with the aesthetic of a fantastic tale so recognizable by its author.

Del Toro won in the director field (a category presented by Natalie Portman as a competition “only between men”) to Steven Spielberg (“The Post”), Ridley Scott (“All the Money in the World”), Christopher Nolan (“Dunkirk”) and Martin McDonagh (“Three Billboards Outside Ebbing, Missouri”).

The one of Guadalajara is the third Latin film director who obtains this distinction after his compatriots Alfonso Cuarón (“Gravity”) and Alejandro González Iñárritu (“The Revenant”).

“Since my childhood I have been faithful to monsters,” del Toro said thanking the award from the stage of the Beverly Hilton hotel in Los Angeles, California. “They have saved me and they have absolved me because they are the patron saints of our happy imperfections,” added the Mexican, who managed to stop the musical curtain that invites the winners to finish his speech.

For his part, the British Gary Oldman met the forecasts and won the award for best actor in drama for “Darkest Hour”, an interpretation for which he did not hesitate to take the character home, he confessed.

“My wife used to say that she slept with Winston Churchill and woke up with Gary Oldman, I guess it’s better so the other way around,” the actor laughed.

While James Franco was named best comedy actor for “The Disaster Artist” and invited to the stage Tommy Wiseau, the cult filmmaker who plays in the film, but did not allow him to speak during his speech.

The prize for the best song was for “This Is Me”, from “The Greatest Showman”, written by Benj Pasek and Justin Paul, the tandem who left his mark last year with “La La Land”, while the title of best animated film was for “Coco”, the Pixar film about the traditional Mexican Day of the Dead.

The director of the film, Lee Unkrich, thanked in Spanish for Mexico and its Day of the Dead culture.

“‘Coco’ would not have existed without the wonderful people of Mexico and without their beautiful ‘Day of the Dead’ tradition,” he said.

Finally, the German film “In the Fade”, by Fatih Akin, won the prize for the best foreign film, a category in which the Chilean “Una mujer fantástica”, by Sebastián Lelio, competed.