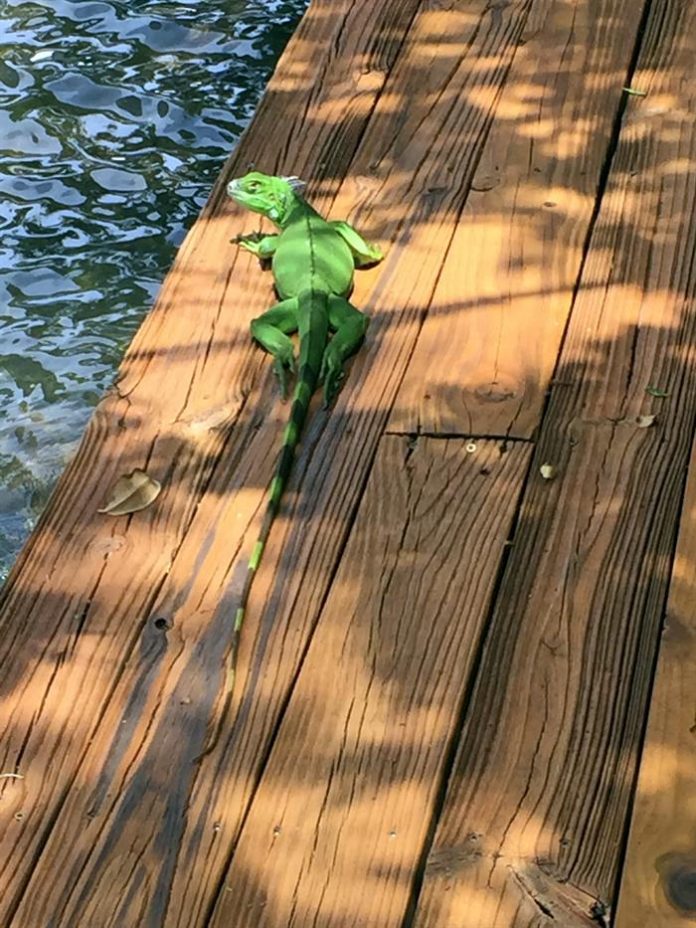 The cold wave that has half the United States shivering is a help in the arduous fight against invasive animal species that, like green iguanas and Burmese pythons, came to Florida as pets and today they are a plague.

The media of South Florida cities such as Miami, Fort Lauderdale, Tampa and Palm Beach these last days collect photos and videos of neighbors who have found iguanas frozen in your garden or your pool and others that literally has fallen on them from a tree one of these reptiles in a frozen state.

Both the green iguanas, which are everywhere, and the pythons of Burma, which have their fief in the threatened wetland of the Everglades, the largest natural reserve in Florida, suffer when the temperature drops below 40 degrees Fahrenheit (4 , 4 degrees Celsius), as it happens these days, and can even die.

A few weeks ago, the same media echoed the damage caused by green iguanas descendants of those who came to Florida decades ago as pets.

Some also published tips to get rid of them given by experts who live on that.

A great recipient of tourists, Florida is also welcoming and hospitable to animals, as shown by the more than 500 species of mammals, birds, reptiles, fish, amphibians and non-native insects that live in the wild in this state, according to the public body in charge of fauna and its conservation (FWC).

However, given the proliferation of some of these animals and the damage they cause to native species, the authorities have had to put in place plans to eliminate them.

In the case of the Burmese pythons, the most effective plan seems to be to authorize hunters to enter the Everglades and kill them. For each dead specimen they are paid an amount and, if it is a female with eggs, the amount is greater.

In 2010, when another cold wave hit Florida, dead pythons appeared in the huge wetland, something that if it happens now few will regret, although even these voracious predators have their defenders.

The organization People for an Ethical Treatment of Animals, known as PETA for its acronym in English, recently sent a letter to the authorities of the agency that controls water in South Florida (SFWMD) and the Commission for the Conservation of Wildlife. (FWC) to ask that they investigate whether python hunters are violating the norms that prohibit cruelty to animals.

SFWMD launched in 2017 a program to control the population of pythons in the Everglades in which 25 hunters participated. In nine months they killed more than 700 reptiles in the counties of Collier, Broward and Miami-Dade.

Dusty “Wildman” Crum, one of the hunters, defined these batidas as “necessary from the point of view of the environment”, because the population of mammals in the Everglades is disappearing at an alarming rate because of a “predator that reproduces very quickly and consumes everything in its path. ”

Like the green iguana, from Central and South America, Burmese pythons arrived here due to the Floridians’ fondness for exotic pets.

Exemplary captives who escaped from terrariums, cages or fish tanks or were left free by their owners in an irresponsible manner were accommodated to the nature of South Florida.

To prevent the introduction of non-native species, FWC has created the so-called “Amnesty Days of exotic pets” in which people overwhelmed by the size reached by the animal, because they can not control it or because of the danger involved, they give it voluntarily.

Healthy animals are given for adoption to strictly selected people.
The next amnesty day is set for January 13 at the Naples Zoo, a tourist town on the west coast of Florida.

Sarah K. Lessard, public relations specialist at FWC’s Division of Species and Habitat Conservation, tells Efe that although it is illegal to release non-native species in the wild, in Florida that is the “primary source” of introduction.

In each amnesty, people deliver, above all, red-eared turtles or yellow-bellied turtles, green iguanas, royal pythons and boas, tortoises from African spurs and small Australian marsupials known as “sugar gliders”.