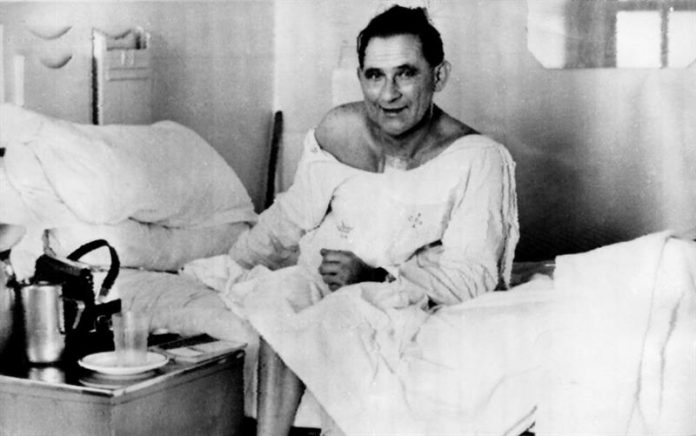 Surgeons from around the world celebrated today at the Groote Schuur Hospital in Cape Town, South Africa, the 50th anniversary of the first heart transplant, carried out by the South African doctor Christian Barnard in 1967.

Barnard became a key figure in the history of medicine by starring what was then considered a scientific odyssey: successfully transplant the heart of a young woman who had died in a traffic accident to Louis Washkansky, 54, who died 18 days later because of pneumonia.

Despite Washkansky’s death, Barnard was cheered throughout the world for his surgical feat, and repeated experience a year later, when he replaced the sick heart of a retired 58-year-old dentist, Philip Blaiberg, who lived twenty more months with his new heart

After the successful operations of Barnard, surgeons in Europe and the United States began to perform heart transplants, improving the procedures used for the first time in South Africa.

Therefore today, in commemoration of the innovative procedure, surgeons and cardiology experts from around the world met at the hospital where this milestone occurred to honor one of the most respected names in the medical world, according to the local newspaper “News 24” .

In addition, and as part of the celebration of the fiftieth anniversary, the South African city hosts a three-day conference in which specialists from the field intend to make the draft “Declaration of Cape Town”, with which surgeons, academics and political leaders commit themselves to help the 33 million people suffering from rheumatic heart disease worldwide.

“We look back and take off our hat at what happened 50 years ago, we also see what has happened since then until now, and how we have improved heart surgery,” said Professor Deon Bezuidenhout of the cardiovascular research unit of the University of Cape Town.

However, Bezuidenhout pointed out that it is necessary to facilitate the access and financing of these transplants “to improve the destiny of millions of people who do not have it yet”.

Heather Coombes, director of operations of the start-up Strait Access Technologies, said that “it is not acceptable” that in the United States there is a cardiac center for every 120,000 people, while in Mozambique there are only two for 27 million citizens.

“The conference does not propose that the first world comes to solve our problems, we have to do something and they can guide us and help us, it is a commitment from all sides to recognize that there is a problem and to commit to do something about it,” he said. Coombes.

For this, the specialists demanded the cooperation and contribution of governments, NGOs, academies, companies and health workers.

Now, fifty years after Barnard performed his pioneering operation, heart transplantation is considered a routine activity that last year saved the lives of more than 7,000 patients around the world.

The leading country in heart transplants is Spain, which last September revalidated its global leadership for the twenty-fifth year in a row, with 43.8 organ donors per million population in 2016, according to the National Transplant Organization.

The country contributes 18.5% of the donations of organs of the European Union and 6.6% of all those registered in the world (30,557).

The total number of organs transplanted worldwide in the last year amounts to 126,670, which represents “a historical increase” of 5.8% over the previous year, and of these, 7,023 were heart transplants.