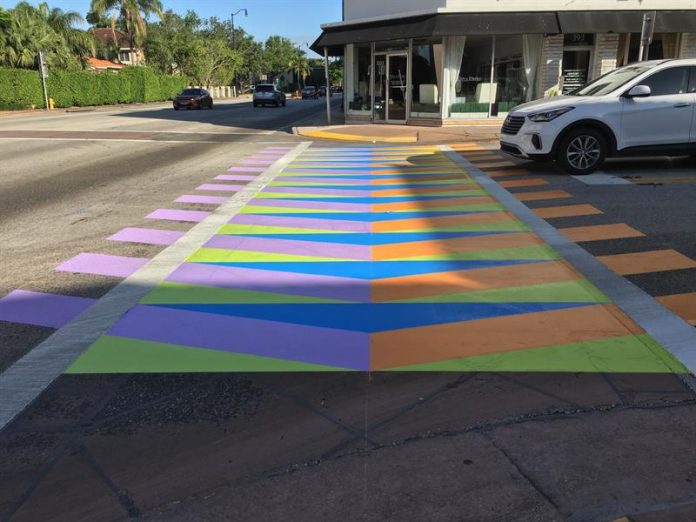 The white stripes of eight pedestrian crossings near the headquarters of the City of Coral Gables, a city near Miami, have been colored and “dance” thanks to an artistic intervention by the Venezuelan Carlos Cruz-Diez.

On the occasion of the Art Basel fair, which takes place next week in Miami Beach, the authorities of Coral Gables commissioned the master of kinetic and optical art a project that has changed the appearance of the center of that city and will remain until the end of January , according to a municipal statement.

Cruz-Diez, born in Caracas in 1923 and based in Paris since 1960, uses chromatic spectra to create optical illusions that give an idea of ​​movement or instability.

Not only the headquarters of the City Hall, headed by Raúl Valdés-Fauli, looks different with the placement of thirteen panels between the columns of the frontispiece of the building, but the places for pedestrians to cross in the neighboring streets.

The traditional black and white colors, stripes and asphalt, have given way to original designs in pink, blue, purple and other vibrant shades.

The intervention is complemented by an exhibition in the municipal museum of photographs of this type of non-permanent works that Cruz-Diez has made in various cities around the world.

In 1989, Cruz-Diez wrote a text about interventions in public spaces in which he stated that “journeying daily through the urban space changes our personality, becoming routine and obedient beings of codes that nobody questions”.

“The artist can create ephemeral manifestations that generate unprecedented events capable of upsetting the city’s” linearity “and at the same time that surprise the urban routine, it is a way to produce different readings of such spaces, and to desacralize the utilitarian objects of urban furniture” , according to the text reproduced on its website.