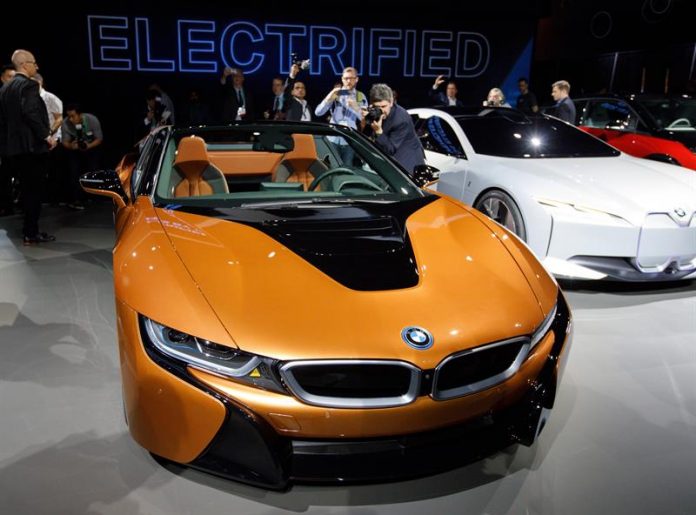 The opening today of the Los Angeles Motor Show confirmed the role that electricity will play in the next few years in the sector as an element reserved to increase the power and capabilities of high-end vehicles in the market.

Who summed it up best was Tobias Moers, president of AMG, the Mercedes-Benz firm dedicated to producing high-performance and powerful versions of the vehicles of the German house.

Presenting today, in the first day for the media of the Los Angeles Auto Show, the Mercedes-Benz supercar AMG Project One, Moers said that electric motors “are key especially in high performance vehicles.”

The Mercedes-AMG Project One is the perfect example of the growing use that manufacturers are applying to electric motors.

He is a direct descendant of the Mercedes-Benz Formula 1 world champion vehicle, combines a combustion engine with electric motors to generate 1,000 horsepower and a maximum speed of 217 miles per hour (about 350 kilometers per hour).

In the same way of pairing electricity and high performance, another German brand, BMW today introduced the i8 Roadster, the first convertible two-seater version of the i8 sports hybrid and can travel almost 30 kilometers with electricity only.

The i8 Roadster uses a 1.5-liter, three-cylinder twin-turbo engine that develops 228 horsepower to power the rear wheels and an electric motor of 141 horsepower for the front wheels.

But the current of incorporating electric motors and combining them with combustion engines is not limited to vehicles designed to reach high speeds.

Today, Jeep, the manufacturer of SUVs of the Fiat Chrysler group (FCA), officially presented the new generation of the iconic 4×4 Wrangler in the Los Angeles saloon.

As the man in charge of Jeep, Mike Manley, said today, when presenting the vehicle in a room full of journalists, “the Wrangler expresses the essence of the Jeep” so the new generation is an evolution of the classic design that has turned the vehicle into a big success.

Manley announced that the vehicle will be sold in the United States and internationally with several engines, including a new one in North America, by popular demand: diesel of 3 liters and 260 horsepower.

The rest will be a turbodiesel of 2.2 liters and 197 horses for international markets, and two gasoline engines; one of 3.6 liters in V6 and 285 horses and another new one of 2 liters turbocharged of 270 horses.

But Manley also hinted that the new Wrangler could become the first hybrid-engine Jeep vehicle.

After the presentation of the Wrangler, Manley explained in declarations to Efe, that the new generation of the SUV is designed to incorporate electrification because it will allow to increase even more the capabilities of the vehicle.

“Obviously, hybrid technology is going to provide advantages over consumption, but in the case of Wrangler, if electrification is used properly, you can get a vehicle that is even more capable,” he said.

“That’s why, when we worked on the development of this platform, we were thinking about electrification,” he concluded.

In the case of Mercedes-Benz and Volkswagen (VW), the electrification of their models will be carried out quickly and radically.

Mercedes-Benz plans to have by 2022 more than 50 electrified vehicles (hybrid or fully electric). While VW, which is talking about the total abandonment of combustion engines, presented today in Los Angeles prototype I.D. CROZZ, a SUV all-electric compact compact.

“The I.D. CROZZ and I.D. Buzz (a reinterpretation of the classic VW Bus of the seventies) will help VW start the electric vehicle revolution in the United States,” said VW President of the United States, Hinrich J. Woebcken.

Also today, the Los Angeles Auto Show presented other news.
One of them has been the Infiniti QX50, a medium-sized SUV that is equipped with the world’s first mass-produced variable compression engine.

For its part Lexus introduced the RX 350L 2018, an extended version SUV SUV sales of the luxury brand of Toyota, while the Japanese Mazda also debuted the Mazda6, its flagship has changed its interior, incorporated new technologies and added the option of a 2.5-liter turbo engine.

Finally, the total traction specialist Subaru revealed the Ascent 2019, the largest vehicle of the Japanese manufacturer and can carry up to eight passengers, with a Boxer turbocharged engine of 260 horses.