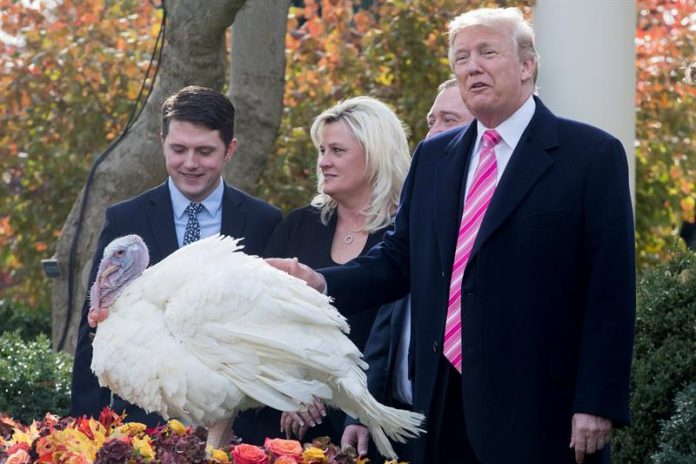 The president, Donald Trump, today fulfilled the tradition of pardoning two turkeys who will be saved from tasting at Thanksgiving, before leaving for his club in Palm Beach (Florida) to celebrate this festivity with family, the most popular from the country.

In the company of his wife, Melania Trump, and their son, Barron, the president pardoned in a ceremony at the White House Rose Garden a turkey named “Drumstick”, raised in Minnesota and weighing 21 kilos.

Another turkey, called “Wishbone”, of 16 kilos and also coming from Minnesota, will also survive Thanksgiving, but did not have the honor of being pardoned at the ceremony because it received the least support from the two in a vote on Twitter organized by the White House.

The two birds did pose for journalists in the White House before the pardon, after having stayed since the weekend in Washington in a luxury hotel, the Willard Intercontinental, on behalf of the National Federation of Turkey.

88 percent of Americans opted for turkey baked in the traditional Thanksgiving meal, according to data from that federation, which since 1947 gives the president on duty with at least one of these birds.

Harry Truman was the first president to receive a turkey from the federation 70 years ago and since he was “hard to crack,” in Trump’s words, the animal was not pardoned.

“Today I’m going to be a much better president,” joked Trump, noting that, unlike tens of millions of turkeys, “Drumstick” is going to be “very happy”, because he has “a very bright future ahead”.

In 1989, then-President George HW Bush inaugurated the tradition of pardoning a turkey before Thanksgiving and all his successors have held this ceremony, including Barack Obama accompanied by his two daughters until last year, when Malia and Sasha passed the Witness his little cousins.

“As many of you know, I have been very active in the annulment of a series of executive actions of my predecessor,” said Trump ironically about his determination to undo much of Obama’s legacy.

However, he said he was informed by the White House legal office that “under no circumstances” is it allowed to revoke the pardon of the two turkeys pardoned by Obama last year.

To those two lucky ones, “Tater” and “Tot”, the president sent them a message: “You can rest easy”.

“Drumstick” and “Wishbone” will join turkeys pardoned in previous years in “Gobbler’s Rest,” a facility on the campus of Virginia Tech University.

On the other hand, the National Federation of Turkey gave the White House two copies of a Pennsylvania farm that, according to Trump, will be donated to a charitable organization in Washington that provides hot meals to people in need.

During the ceremony, Trump ignored the question twice asked by the same journalist about whether he intends to “forgive someone”, in reference to the investigation of special prosecutor Robert Mueller on the alleged Russian interference in the 2016 elections, which has already Deposited charges for three ex-advisers of the tycoon.

Trump and his family will travel today to his club Mar-a-Lago, in Palm Beach, where they will celebrate Thanksgiving and rest until next Sunday.

President Abraham Lincoln (1861-1865) established the “Thanksgiving” holiday to commemorate the celebration with which the British settlers who came to the country aboard the “Mayflower” in 1620, wanted to thank God for its good harvest after a hard winter.

In 1789, when George Washington was appointed first president of the United States, he chose November 26 as the official day of Thanksgiving, but in 1863 Lincoln set the final official date on the last Thursday of November.

Since then it has become the most popular party of the year, shared by all Americans regardless of their religion.