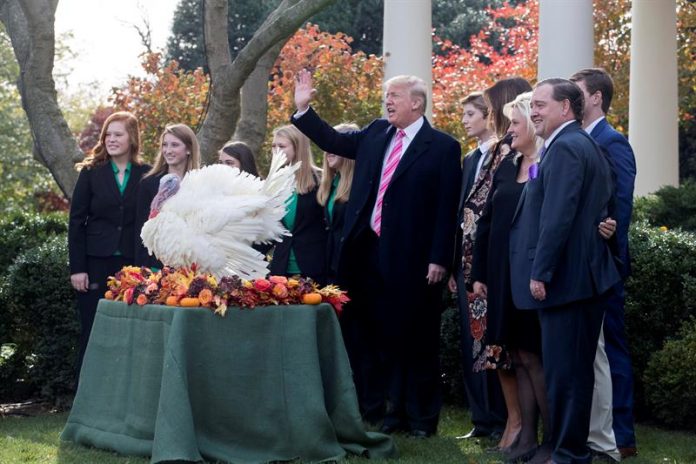 US President Donald Trump arrived today in Palm Beach (Florida), where he will celebrate thanksgiving on Thursday with his family at his club Mar-a-Lago, which is already surrounded by forts security measures.

The Republican arrived at the Palm Beach International Airport where he was received by a hundred supporters.

Trump already celebrated this morning in the White House, together with the first lady Melania, the traditional ceremony for the Thanksgiving holiday, in which each year it is customary to pardon two turkeys.

In Florida, federal and local authorities established air and sea safety zones for their visit to protect the private club of their property.

The US Coast Guard On Monday, it established three maritime security zones between now and next Sunday to prevent “acts of terrorism, sabotage or other subversive acts, accidents or other causes of a similar nature,” the organization said in a statement.

Safety zones, in which the boating of boats without prior permission is prohibited, includes parts of the Lake Worth lagoon, intercoastal waterways and areas of the Atlantic Ocean in the vicinity of the Sea-to-Lake Club and the Southern Boulevard, in Palm Beach.

Violating the perimeter of the security zone can result in a fine of up to $ 88,000 and even up to 12 years in jail.

On the other hand, protesters in favor of immigration and contrary to the Government’s announcement to end Temporary Protected Status (TPS) for Haitian immigrants went to Palm Beach County today to protest.

A group of activists, community leaders and affected immigrants gathered on an access road to the Mar-a-Lago mansion, where the president will celebrate the holiday and rest until next Sunday.

The march for the TPS Extension and Permanent Status for the affected Haitians left Miami Gardens and headed to Palm Beach County.

The US government gave a margin of 18 months to the 58,706 Haitian beneficiaries of the TPS to return to their country or seek an alternative.

Thus, the TPS for Haiti will end on July 22, 2019, as detailed by the Department of Homeland Security (DHS).

Activists in favor of Haitians argue that a persistent cholera epidemic and the damage caused since 2016 by three hurricanes that hit that impoverished Caribbean nation aggravate the difficulties for the return to their country of origin.

Days after a 7-degree earthquake and several aftershocks devastated Haiti in January 2010, with a death toll of 300,000, then-President Barack Obama granted the state of protection for 18 months for Haitians in the United States, which otherwise They would have to go home.

Obama renewed the TPS for Haitians every time it was exhausted.

Since Trump has been in the White House, three TPS have not been renewed: those of Haitians, Nicaraguans and Sudanese.