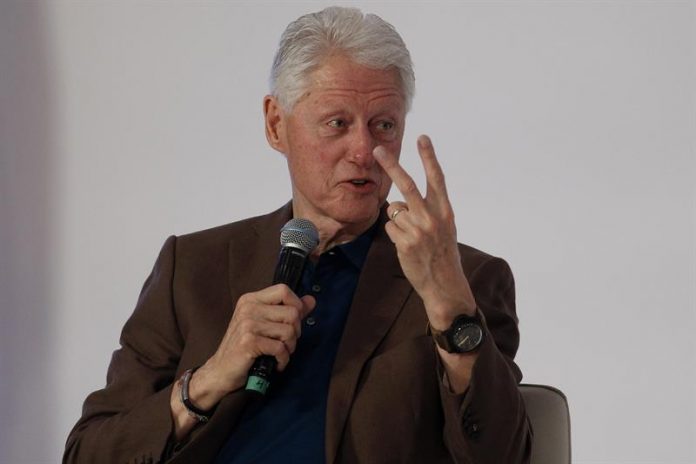 The avalanche of accusations of sexual abuse against powerful figures from the world of cinema and politics in the US has rekindled the scrutiny of former President Bill Clinton, accused for years by several women of different affronts.

After the recent scandal of the almighty producer Harvey Weinstein, denounced by dozens of women for sexual assault, Hollywood lives immersed in the controversy before the trickle of new accusations of splashing actors like Kevin Spacey.

But the stain of that type of allegations has also stung politicians such as Democratic Senator Al Franken, accused this week by a presenter of “kissing her by force” without her consent and grabbing her breasts while she was sleeping in 2006.

That accusation came at a time of special sensitivity in Congress, due to allegations that weigh on Roy Moore, a Republican Senate candidate for Alabama accused of taking advantage of several teenagers about four decades ago.

As if that were not enough, the Democratic representative for California Jackie Speier revealed this Friday that she suffered, years ago as a young employee of the Congress, sexual harassment on the part of a superior in the office of a congressman of her party.

“This is a national problem and Congress is not immune to that,” Speier said.

Another woman, Juanita Broaddrick, also spoke this week as a victim of alleged sexual abuse and pointed to Bill Clinton, who ruled the United States from 1993 to 2001.

“I feel that people are beginning to believe and realize that I was really sexually assaulted by Bill Clinton,” he told Fox Broaddrick, who has argued for nearly two decades that the former president raped her in 1978 as Arkansas attorney general.

Well known is that Clinton caused a stir with the scandal of his extramarital relationship with White House Scholar Monica Lewinsky, which earned him a historic 1998 political trial, although he was exonerated.

But the doubts about his sexual behavior went beyond the “Lewinski case”, after facing the sexual harassment lawsuit filed by Paula Jones, former employee of the state of Arkansas, which resulted in an agreement between the parties to pay the litigant 850,000 dollars in exchange for withdrawing an appeal.

Jones accused Clinton of convening her in 1991 in a hotel room, in which the then governor of Arkansas lowered his pants and asked for oral sex.

The sexual behavior of the former president not only came back to the fore this week, but also impacted the Democratic Party, which has venerated him to date.

Sen. Kirsten Gillibrand, who succeeded Hillary Clinton in her Senate seat in New York, told The New York Times on Thursday that Bill Clinton’s “proper response” should have been resignation for his affair with Monica Lewinski.

The unexpected reproach of Gillibrand, who sounds like possible presidential candidate for the elections of 2020, provoked the anger of Philippe Reines, ex-adviser of Hillary Clinton.

“For twenty years, you accepted the Clinton support, money and seats, hypocrite, interesting strategy for the 2020 primaries. Good luck,” Reines wrote on his Twitter account.

Hillary Clinton herself was asked this Friday in a radio interview about Gillibrand’s comments about her husband: “I do not know exactly what you’re trying to say,” the former first lady merely responded.

The 2016 Democratic presidential candidate defended the “sexual assault survivors” during the electoral campaign, although her detractors think that she always acted as a shield for her husband.

In the interview, Clinton did expand on the controversy of Al Franken, whom he valued to apologize and abide by an “accountability”.

“I,” he snapped, “do not hear that from Roy Moore or Donald Trump, look at the contrast between Al Franken, accepting responsibility, apologizing, and Roy Moore and Donald Trump, who have not done any of that.”

Without mentioning those words, the president, Donald Trump, today attacked his former rival to qualify as the “worst loser of all time.”

In the 2016 election campaign, several women accused the New York mogul of sexual abuse, who rejected those allegations.

In a video of 2005 uncovered in the middle of the campaign, Trump boasted, in a very vulgar tone, that his fame allowed him to abuse women, a revelation that provoked an avalanche of criticism.

The tycoon counterattacked by airing the dirty laundry of Bill Clinton, whom he described as “a sexual predator” and “the biggest abuser who ever sat in the Oval Office.”

In the end, neither the video nor the vituperation of Clinton prevented his unexpected victory in the elections of November 8, 2016.