The Spanish singer Alejandro Sanz, who in the framework of the Latin Grammy has received the Person of the Year award for his successful career, today came out in defense of undocumented immigrant youth in the United States known as “dreamers.”

“They have lived in this country for many years and still are still in an illegal situation, they are the ‘dreamers’ and those children are our children, from our community,” said Sanz.

“When you’re a father, you’re the father of all the children in the world,” the singer said.
Later, and after receiving the Person of the Year award from Juan Luis Guerra, Sanz interpreted his hits “Cuando nadie me ve”, “Not the same” and “Corazón partío”, and was accompanied on stage and in the choirs by a group of “dreamers” with black t-shirts in which slogans such as “we have a dream” and “protect our families” were read. 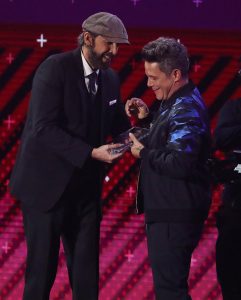 “You are brave, we love you,” the Spaniard finished, before merging into an embrace with all these young people in front of the public of the MGM Grand Garden Arena in Las Vegas.

The permanence in the country of the “dreamers”, young people in an irregular situation who arrived in the USA. as children, it is in limbo after the White House, after the coming to power of Donald Trump, eliminated the program that protected them.

Minutes later, Alejandro Sanz appeared before the media to explain his commitment to the “dreamers” and what he wanted to convey with his performance.

“I learned some time ago and I saw the problem of them, it seems an incredible thing that can happen in this country, in this century, and that there is no sensitivity with people,” the singer said, assuring that sometimes the laws They do in the offices “and do not think” of those affected.

Sanz also stressed that these young people are waiting for immigration reform that allows them to stay in the US, because “they do not know anything else” because they came to the country when they were just children.

“It seems to me something very poetic, deep down, they are guys who have the courage to say: ‘A border will not stop me,'” he said.