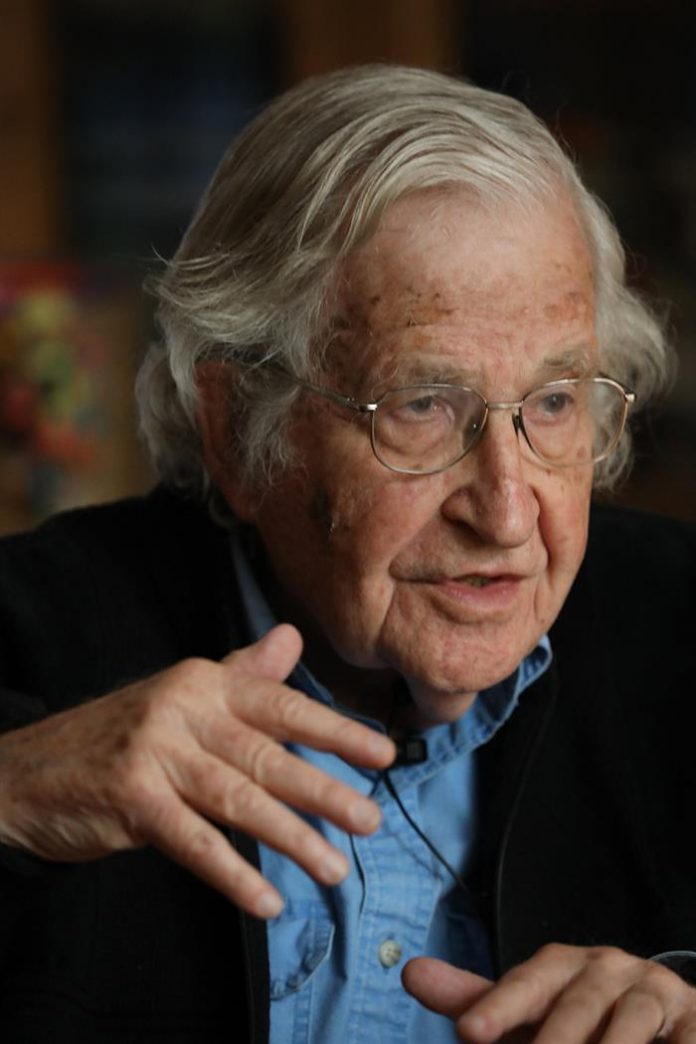 The American linguist, philosopher and activist Noam Chomsky today accused the president of the United States, Donald Trump, of “wanting to advance towards the destruction of the environment” with his denial of climate change, and blamed the capitalist system for aggravating global warming.

“The United States has a report that the Trump Administration will not take into account and warns that sea level could increase more than two meters.

It is a severe danger, “he warned in a debate with other scientists on climate change at the National Autonomous University of Mexico (UNAM).

“The most powerful country is confronting the entire world and has been left alone to have wanted to advance in the path of environmental destruction,” said the philosopher in relation to Trump’s willingness to withdraw from the Paris Accords.

Chomsky criticized the Mexican government for “proudly announcing” the discovery of 1 billion barrels of oil, which will mean that international companies go to these oil reserves to “exploit them, enrich themselves and lead to disaster,” he said.

According to the philosopher, the capitalist system is responsible for climate change since it “seeks to maximize individual gain without taking into account the effects it will have on others” or on the environment.

“There are technical and social possibilities to deal with it (climate change), but the fundamental question is whether we are willing to question the values ​​that govern our lives,” Chomsky added.

The Mexican scientist Mario Molina, Nobel Prize in Chemistry 1995, wanted to dismantle the “myths” wielded by those who deny human responsibility in climate change.

More than 97% of scientists studying climate change argue that the human hand is causing the temperature increase, said Molina, adding that “finding such an extraordinary consensus is a unique situation in science.”

He also warned that the consequences of climate change “are not for the end of the century” but that this is already having an impact on the planet as, for example, an increase in the intensity of hurricanes.

Molina rejected that “we can not do anything” in the face of climate change and recalled that there are already “renewable energies that can compete from the point of view of price with traditional fossil fuels.”

“If the temperature rose 5 degrees Celsius there would be areas of the planet uninhabitable where people would die when they go out in the summer, there would be gigantic migrations and droughts,” Molina said, describing “reckless irresponsibility” Trump’s attitude when denying the change climate.

Chomsky and Molina participated in “The harassment of the wall-to-wall civilization”, a forum organized by the UNAM and the University of Guadalajara with the aim of “discussing the threats that the world panorama experiences” such as climate change or the racism.

“The global community has come to question whether we are facing the end of an era marked symbolically by two walls: that of Berlin, torn down in 1989, and the one that today is intended to be built on the border between the United States and Mexico,” he says. the program of the event.