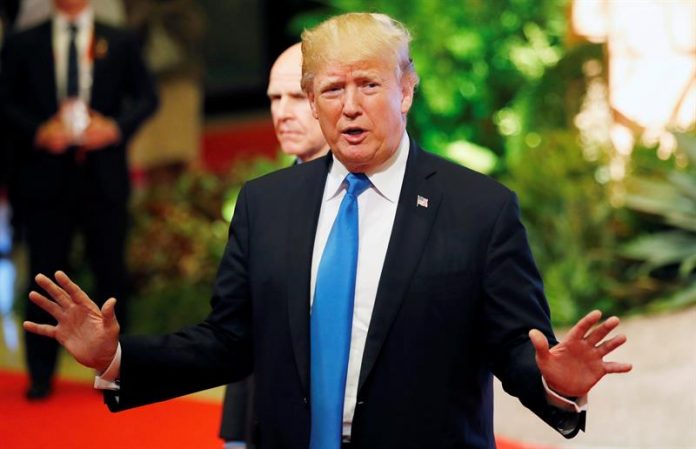 US President Donald Trump announced today in a tweet that he will make an “important statement” when he arrives at the White House after the tour that has taken him in the last two weeks to Japan, South Korea, China, Vietnam and the Philippines. .

“I’ll make an important statement from the @WhiteHouse when I get to D.C. The time and date are set,” the president wrote on Twitter.

Shortly after publishing the tweet and in statements to the press, Trump described as “tremendously successful” his first Asian tour, 13 days
The presidential airplane Air Force One took off today from Manila after Trump participated, since Sunday, in the meetings linked to the summit of the Association of Southeast Asian Nations (ASEAN), which this year celebrates the fiftieth anniversary of its foundation.

In addition to the heads of state and government of ASEAN, leaders from Australia, Canada, China, South Korea, India, Japan, New Zealand, Russia, the European Union (EU) and the UN have been present in the Philippine capital. .

Trump has defended in Manila and during the rest of the tour his new policy of “fair and reciprocal” bilateral agreements, before multilateral, and has sought support against the North Korean regime and the Islamic State (IS), among other things.

In addition, the leader of the White House held its first bilateral meeting with Philippine President Rodrigo Duterte, a meeting in which both undertook to defend the protection of life and human rights.

Trump, however, ignored the requests of organizations that demanded him to criticize the “war on drugs” of Duterte, a controversial campaign to eradicate the crime that has left more than 7,000 dead in almost a year and a half, according to various estimates.