The democratic politician Bill de Blasio overwhelmingly won the municipal elections in New York, and in his first speech as re-elected mayor warned that only just “to start” and that his victory marks the “beginning of a new era.”

De Blasio, 56, aligned with the progressive positions of the Democratic Party, is the first representative of that party that is re-elected to the post, after Ed Koch, who had three terms, between 1978 and 1989.

“We have just started,” De Blasio said in the first message to his followers after his victory at the polls, a speech that was loaded with new municipal promises but also with a vision that transcends the borders of the largest city in the country.

With the scrutiny of 96% of the polling stations, De Blasio won 66% of the votes, compared to the 28% obtained by his Republican rival, Nicole Malliotakis, daughter of a Greek father and Cuban mother, who tried to rescue the flag of the immigration.

Malliotakis accepted his defeat by presenting his followers one hour after the polls closed. She acknowledged in her message that her mission was difficult, because of the clear Democratic sympathies of New York, but she was satisfied because she could make her voice heard.

De Blasio, whose victory anticipated all the previous polls, said that after four years of municipal management there are many citizens who still want to live in a “fairer city”.

“We can not stop now,” he said. “This is the beginning of a new era,” he insisted, and stressed that his intention is to “go further.”

“This is not only the beginning for the city, but for the country,” added the mayor, after making allusions to the president of the United States, Donald Trump. 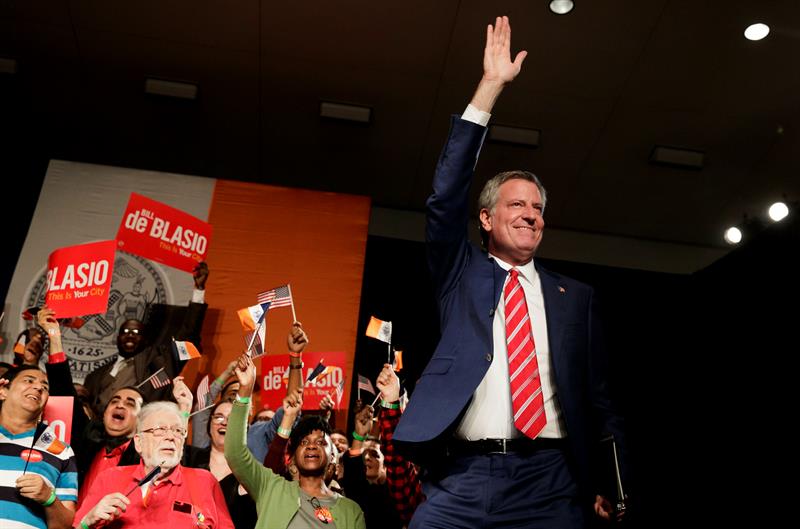 The victory of Bill De Blasio came a day before the first anniversary of Trump’s triumph in the presidential election, against the Democrat Hillary Clinton.

The victory of De Blasio coincides with that of two Democrats today in the elections for governors of Virginia and New Jersey.

In New Jersey, Democrat Philip Murphy will replace Republican presidential candidate Chris Christie and in Virginia the Democrats remain in power, thanks to the victory of Ralph Northam.

De Blasio did not miss the opportunity to mention that, after today’s elections in the three places, the United States is “a little more fair and a little bit blue”, referring to the color of the Democrats.

“To hear us in New Jersey, in Virginia, it’s a message to the White House, too,” said the re-elected mayor.

De Blasio took the opportunity to criticize Trump’s immigration policies and remember that New York was forged with immigrants, like his own family, of Italian origin.
“We are all immigrants, and an attack on immigrants is an attack on all of us,” he insisted.

In his message, which precedes a press conference to be offered this Wednesday, De Blasio recalled the main proposals he has taken in this election campaign.

Among them, he cited free schooling after 3 years of age and a new tax on “the richest” to improve the suburban subway system, the largest in the country and transporting millions of New Yorkers daily.

Both proposals have encountered setbacks in the administration of the governor of the state, the also Democrat Andrew Cuomo. Although the two politicians share a party, they frequently clash over management rivalries and political misgivings.

Although New York has Democratic sympathies, as it has been demonstrated in the last presidential elections, the city was administered by Republicans Rudy Giuliani and Michael Bloomberg between 1994 and 2013.

Today, recalling the victory he had in his first municipal elections, those of 2013, De Blasio said that then many thought his work was “impossible”.

“They have seen important changes in the last 4 years, but have not seen anything yet,” affirmed, triumphantly, the re-elected mayor.