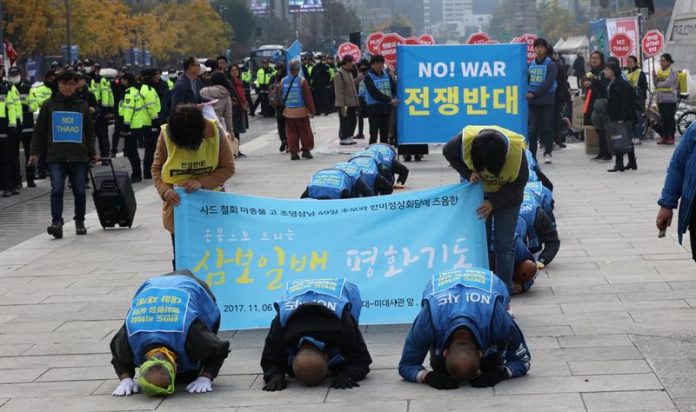 The arrival of US President Donald Trump to South Korea tomorrow will be marked by numerous protests across the country, which he visits as part of a tour of Asia in which the crisis with North Korea plays a major role.

In advance, dozens of South Koreans demonstrated today, as happened the weekend, for and against Trump’s trip to the US embassy in the central Gwanghwamun square of the South Korean capital.

The South Korean government has only allowed this type of small concentrations in the aforementioned zone while it has activated large security devices in the face of the numerous demonstrations that are expected tomorrow, day in which Trump will arrive, in different parts of the country.

“President Trump we are not afraid to die, attack North Korea right now!” “Kill rocket man Kim Jong-un (nickname Trump used to refer to the North Korean leader) and bomb North Korea” prayed the banners of the protesters in favor of the visit of the US president today in Seoul.

“(Trump) I should kill Kim Jong-un, it’s a threat to the South Koreans!” A 69-year-old protester surnamed Lee told Efe.

His co-religionists also carried messages in favor of the conservative ex-president Park Geun-hye, who was dismissed from her position and is being tried for a corruption case, or against the withdrawal of US troops from South Korea (the Pentagon maintains a contingent of 28,500 man in the country).

Those opposed to the trip of Trump to South Korea, somewhat less numerous and also less seasoned, were located a few meters away in the space delimited by the authorities and wore placards in which one could read “Zona anti-Trump” or “No a Trump, not war. ”

Trump is scheduled to meet tomorrow in Seoul with his counterpart, Moon Jae-in, in a meeting marked by the crisis with the North Korean regime and its repeated weapons tests.

The US president will also deliver a speech before the South Korean Parliament on Wednesday before heading to China, the next destination of his Asian tour, which also includes stops at the APEC and ASEAN summits in Vietnam and the Philippines.