Selena, honored with a star on the Hollywood Walk of Fame

The singer Selena Quintanilla, murdered in 1995, today posthumously received her star on the Hollywood Walk of Fame in Los Angeles (USA), an act that for her sister, Suzette Quintanilla, staged that “the queen of Texan music “left a legacy” that will always remain “.

“Selena represented all Mexican-Americans, she was an example of how success and hard work can achieve success, she said that the impossible is possible, her goal was never to live forever, but to create something that remains. Today he has achieved it, “said Suzette Quintanilla.

Selena’s career began in the 1980s as a member of the family band “Selena y Los Dinos”, accompanied by her brothers Suzette and A.B. Quintanilla.

The artist, an icon among the Hispanic public, was honored with the number 2,622 star of the Hollywood Walk of Fame, located in front of the historic Capital Records record store, during a ceremony that hosted hundreds of fans in the streets.

Tejano actress Eva Longoria, Los Angeles Mayor Eric Garcetti, and Gregory Nava, director of “Selena”, the biographical film that premiered in 1997 with Jennifer Lopez as the protagonist, were invited as guests.

An excited Longoria and about to mourn recognized that she owed a lot to Quintanilla.

“This star is for every Latina, I grew up without seeing myself reflected in movies, on television, in music … I did not see myself reflected in anything, but everything changed with her.” Her voice opened the hearts of millions of people and It validated my existence, it showed that Mexican-Americans also exist, “said the actress.

“He showed that we are as American as apple pie and as Mexican as enchiladas,” added Longoria, who promised to continue honoring Selena “doing more for Latinos” in the country. 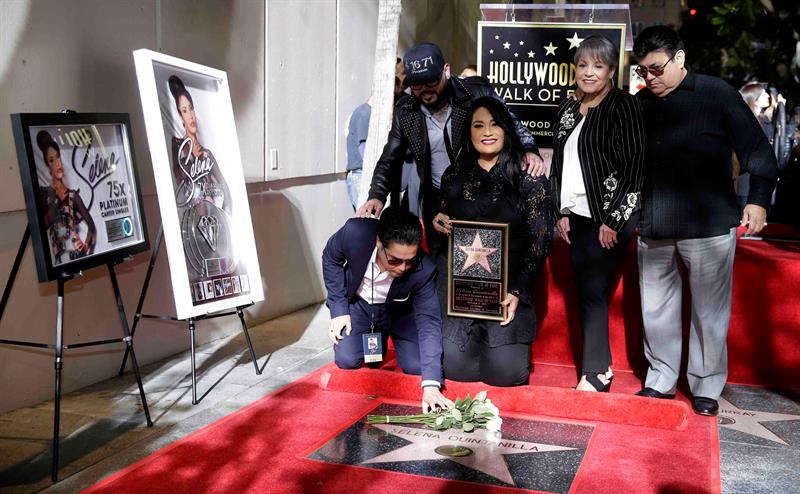 For his part, Garcetti valued the attendance of the fans and dedicated some words to them in Spanish.

“It’s amazing to see the passion of these fans, we are making history here for Selena, she was an angel, and her family are also angels, we need to send that message, especially at this time: here we are and we’re not leaving!” noted Garcetti, of Mexican roots.

The mayor recalled that his grandfather also crossed the border from Chihuahua and began a new chapter in the US. as part of that immigrant community that built the country.

“Selena inspired us because we saw ourselves reflected in her,” he stressed.
The singer, who has sold more than 65 million records worldwide, was 23 years old when she was murdered on March 31, 1995 by Yolanda Saldívar, then president of her fan club.

His death coincided with a time when everything pointed to Quintanilla as the first Hispanic singer capable of capturing both her community and the audience in English within the US market.

Selena, the so-called “Tejano Madonna”, received another Hollywood tribute in August of last year, when her wax figure was unveiled at the Madame Tussauds.

Among the awards received by the artist, who released five albums between 1989 and 1995 and recorded great hits such as “Bidi Bidi Bom Bom”, “Como la Flor” and “Dreaming of You”, highlights the American Grammy (best music record mexico-American), its 13 Latin Billboard awards and dozens of awards for Texan music.

Selena was chosen by Google to star on October 16 a “doodle”, a small animation temporarily placed on its home page and dedicated to personalities, objects or places of great cultural relevance.

The “doodle” of Selena, visible in most countries of America, made a review of the legacy of the artist through a colorful animated video.

Share
Facebook
Twitter
Pinterest
WhatsApp
Previous articleThey grow revenues in fixed telecommunications in Ibero-America and the US.
Next articleBecky G: “For some it’s a problem for a woman to sing the same thing as them”

The ghost of the “special period” threatens Cuba in 2019, warns report

Miami, .- The economic crisis that Cuba is going through will worsen in the coming months and, if it does not open to...

Trump calls “shit holes” to El Salvador and Haiti, according to Washington Post

Irma degraded herself today in a tropical storm as she heads north along the west coast of Florida, the US National Hurricane Center (CNH)...

Los Angeles (USA), - The absence of star forward LeBron James with the Los Angeles Lakers, the team has not wanted to play more...