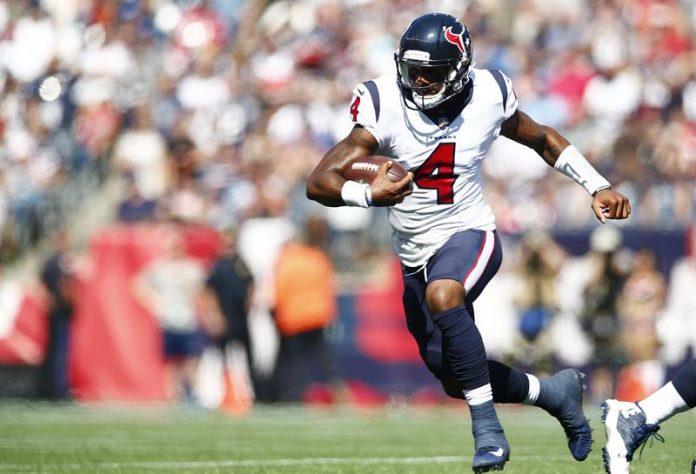 The worst news came today to the Houston Texans after their revelation quarterback, rookie sensation Deshaun Watson, suffered a serious ligament injury to his right knee, which will force him to undergo surgery and miss the rest of his life. the season.

Watson injured his knee during training today, Thursday, without any contact in play.

Although the team has not officially confirmed Watson’s loss, sources close to the team said that Watson suffered a fracture of the anterior cruciate ligament in his right knee.

Watson was injured in an option play, on a natural grass surface. The doctors treated him and helped him out of the field.

Reserve reserve quarterback Tom Savage finished training the Texans and would start next Sunday when the team receives the Indianapolis Colts in their NRG field.

The loss of Watson, 22, is a blow to the Texans (3-4).
Watson’s total passer rating of 81.9 that allows him to lead the National Football League (NFL) as the highest for a player in his first seven professional games in the last 10 seasons.

Watson is also in first place in rushing yards (269) between the pins and is tied for first on touchdown passes (19).

Savage started the season as a starter, but was replaced after completing seven passes on 13 attempts for 62 yards without touchdowns in the loss to the Jacksonville Jaguars in the opening game played at NRG Stadium in Houston.

Watson established a touchdown record with four touchdown passes in the team’s last game against the Seattle Seahawks on Sunday and inscribed his name in the NFL history books.

The young passer, right away, has helped turn the Texans into the NFL’s leading scorer this season, with 30.7 points per game.

Last year, Houston was ranked twenty-eighth in points scored. The 19 touchdown passes from Watson are four more than the passers of the Texans (Brock Osweiler and Savage) combined throughout last season.

Savage, in four seasons as a professional, has completed 63 of 105 passes for 650 yards without touchdowns and an interception, and has been captured 13 times, seven of them so far this season.

Watson would join a Texans injury list that includes the defensive stars J.J. Watt and Whitney Mercilus, which makes the future of the Houston team a complete unknown in order to fight to be in the final phase.

The young quarterback had the best performance of his career by throwing for 402 yards and four touchdowns in the loss to the Seattle Seahawks, becoming the first player in NFL history to surpass 400 passing yards, throw four scoring passes and adding 50 yards on the ground in one game.

This season, in which he was a solid candidate to win the Offensive Rookie of the Year award, Watson has completed 126 of 2014 passes for 1,699 yards with 19 touchdowns and eight interceptions, setting a league mark at the position with the most scoring passes in the first seven games as a professional.

“It’s unfortunate, terrible news,” Seahawks cornerback Richard Sherman said when he heard about the injury. “I feel terrible for him and his family, he had a bright future, he still has a bright future, but his rookie year is over.”

Sherman acknowledged that what he saw him do to Watson was something that impressed him and showed all the potential he has to reach the NFL elite.

“Probably had one of the best months for a rookie that anyone has had in a long time, I’m sure he will continue in the race for the ‘Rookie of the Year’, but it’s something you do not want to hear,” said Sherman.