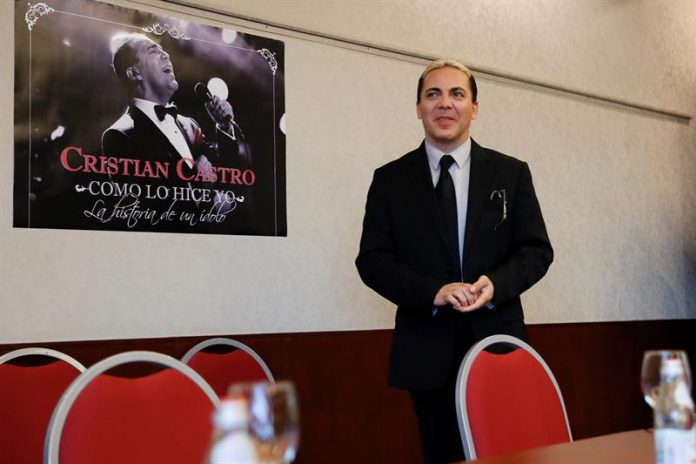 Mexican singer Cristian Castro will play the most memorable songs of Argentinean Sandro, a show he defined today in Buenos Aires as a “daring” and that will premiere in the Argentine capital before embarking on a national and international tour.

His new show, titled “As I did, the story of an idol”, is a tribute to the considered “Elvis Presley argentino”, which will tour different countries in Latin America and the United States, and will premiere during the next 27, 28 and 29 in the capital of the country that gave birth to Sandro.

“I like the challenge and more than the challenge I like the great commitment I have with Sandro’s repertoire, above all it’s a colleague’s commitment,” Castro acknowledged during a press conference on Monday in the Hilton hotel of the capital, chosen place for the three recitales of the next weekend.

After showing his vocal versatility after playing Disney soundtracks – “Men of Action Will Be Today,” Mulan (1998) – and experimenting with his own rock band – The Sphinx (2014) -, the Mexican introduced his fifteenth album “Dicen”, and now it is sent to the Argentine stages to homenajear to one of the great local idols, Sandro (1945-2010).

“I do not want to imitate Sandro, I want to sing to Sandro as Sandro sang it but I want to be me and really get myself into the songs so I can give them more,” he said.

The interpreter of songs like “Azul” said that the repertoire selected for the tribute to Sandro will reach eight Argentine provinces and countries like Colombia, Chile, Dominican Republic, Puerto Rico and Mexico, among others, although he confessed that he wanted to take him to Spain too.

The arrangements prepared for the show are, he said, “too beautiful,” and stated that “live songs sound awesome”, a repertoire, in his opinion “imposing.”

“It looks like maybe the one I’ve been trying to build on during my life,” he remarked.

Of the show the versions of Castro of the subjects “Penumbras” and “As I say”, that used during its promotion in some mass media are already known.

The singer said that he was recently at the home of the mythical Argentine singer where he was received by his widow to sing “something special” during the first concert.

“This show is forever, I want them to see me as someone who loves Sandro, who can sing a show with me and remember Sandro never forget him, because I do not want to forget him,” he insisted.

In addition, he maintained that it was his mother, actress and singer Verónica Castro, who created a “bond” between them, so it is for him a “duty” to be able to raise his songs back to a stage.

A stage that will consist of an orchestra of 25 musicians and a body of dance that will accompany Castro in a performance with different costumes, among which, as promised, there will not be lacking the characteristic robe that Sandro wore in some of his recitals.

Sandro, whose real name was Roberto Sánchez, died on January 4, 2010, at age 64, in a clinic in the Argentinean city of Mendoza two months after receiving a heart and lung transplant with which he tried to save his lifetime.

Nicknamed “El gitano” and Sandro de América, the Argentine singer-songwriter published 53 albums of which he sold more than 8 million copies and acted in a dozen films throughout a race that began in the mid-70’s .

“All these people who may be upset by this stance singing Sandro’s repertoire, I think it should not be because I think it’s a brotherhood with Mexico, it’s a window from Sandro to the international,” he concluded.