Relatives and relatives paid tribute to US soldier. fallen in Niger

Relatives, relatives and neighbors gathered in a South Florida church to pay homage to David Johnson, one of four US soldiers killed this month in an ambush in Niger and whose funeral and burial took place today.

The body of Johnson, a 25-year-old father of two children and an unborn child in January, arrived at Christ The Rock Church in Cooper City in the midst of a car parade and escorted by Police in Broward and neighboring Miami-Dade.

The coffin, wrapped in an American flag, came mid-morning to church for a funeral in his family, headed by the widow, Myeshia Johnson, dressed in white, while around several veterans gathered in the area American flags.

The funeral was attended by Cowanda Jones-Johnson aunt soldier who raised him since he was 5 years old after the death of his mother, in addition to the congressmen for Florida Frederica Wilson, who in the week reported that in a call to Trump made the widow told her that her husband “knew what he had gotten into,” which he called insensitive. 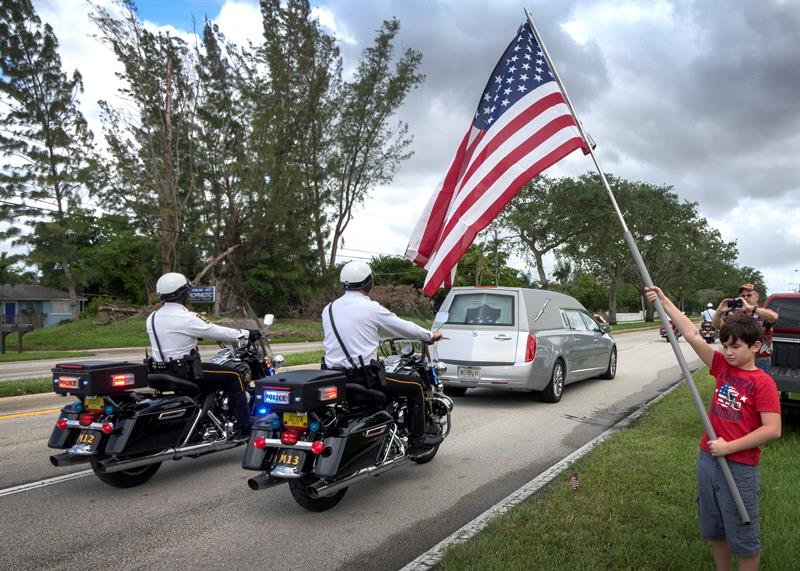 The president accused of “making statements” Congresswoman present during the call made while they went to collect the body of the soldier at Miami airport, and on Saturday he rededicated another comment on Twitter, calling it “crazy”.

Wilson is a close associate of the Johnson family, who before joining the Army participated in a career counseling program for young African Americans and was managed by the legislator, representative of the constituency to which Miami belongs.

Shortly after Johnson’s death in the African country, in circumstances not yet detailed by the US Government, Wilson created a fund that already carries more than $ 600,000 and will go to the education of the soldier’s three children, Ah ‘ leeysa, six years old; The David Jr., two; and a third to be born in January.

After the funeral, the body of the soldier, a resident of the city of Miami Gardens, was taken to the cemetery Hollywood Memorial Gardens, where he was buried with honors by members of the army and his wife, with whom he married in 2014 and who kissed the coffin shortly before it was placed in his grave.

Airbnb rentals in Florida achieve records in revenues and tenants

The tourist rentals of houses and apartments in Florida through Airbnb had about 2.7 million guests and generated to their owners a revenue of...

This girl squad is all about Christmas kisses — and there isn’t even mistletoe in sight! Taylor Swift got in the holiday spirit with model Lily Aldridge and her childhood...

Obama calls for vote to restore “sanity” in American politics

Former US President Barack Obama invoked on Saturday to restore "sanity" in national politics, in a speech that was his first electoral campaign for...

The Golden State Warriors are facing their second chance to close the NBA Finals, which dominate 3-1, when they face the Cleveland Cavaliers in...