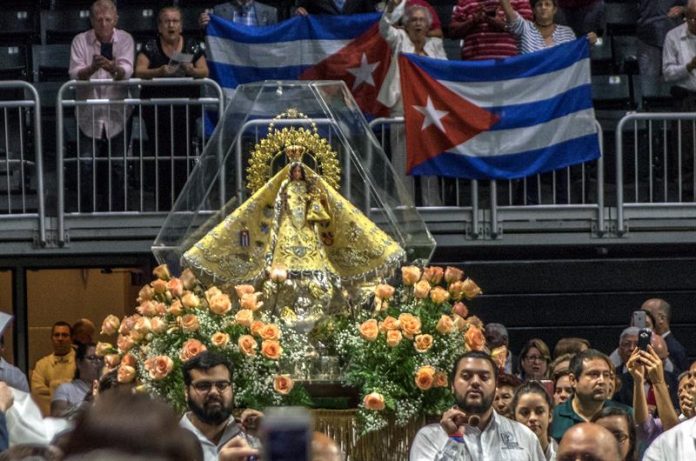 Thousands of Catholic parishioners today celebrated the feast of the Virgin of Charity of Copper, the patroness of Cuba, with a procession and a mass celebrated in Coral Gables, a city bordering on Miami.

The party, which is celebrated every 8 September and this year was postponed as a result of the passage of hurricane Irma Florida, began in the Hermitage of Charity Copper Miami, located in front of the Bay of Biscay, the image of the Virgin of Charity in a car procession to the Watsco Center in Coral Gables.

The rector of the Ermita, Father Fernando Hería, reminded Efe that the postponement of this celebration for today, “Hispanic Heritage Day”, is the second since in 1992 Hurricane Andrew also forced to postpone the celebration of this “great Cuban tradition”.

“Cachita”, as is popularly known the image that is venerated in a sanctuary near the city of Santiago de Cuba, made its entrance tonight in this auditorium, where it was expected by 4000 parishioners, in their immense majority Cuban, that carried banners of the island and scarves with his image.

The virgin made a tour around the edges of the auditorium and later entered through the central aisle to the altar, where was the archbishop of Miami, Thomas Wenski, in charge of the religious office.

Shortly before, the soprano Lucy Poveda performed a song dedicated to the Virgin of the Charity, known as the “Virgin Mambisa” because the independentistas revered her during her uprising against the Spanish crown in the late nineteenth century.

On the island, the current sanctuary of “Cachita” dates from 1926 and is located on a hill in Santiago de Cuba.

Heria stressed that the celebration in honor of this virgin is special for the archdiocese of Miami, because today the Pope Francisco appointed the Peruvian Enrique Delgado auxiliary bishop of this jurisdiction.

The 61-year-old priest, born in Lima and pastor of Saint Katherine Drexel Church in Weston, northwest of Miami, became the first Peruvian to be named bishop in the United States.