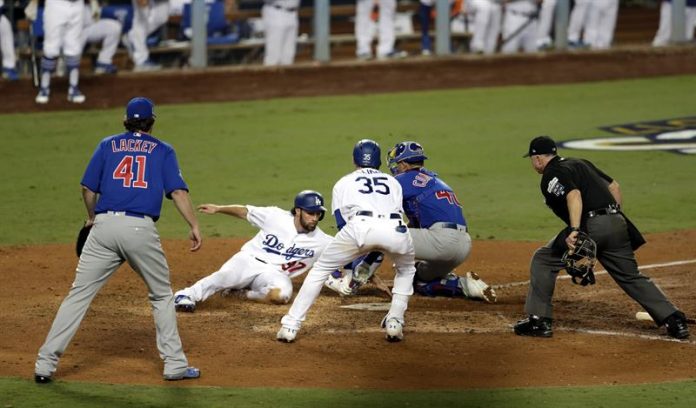 Correa admitted at the conclusion of the second game of the American League Championship Series, that the Astros won by 2-1, that I spoke with Altuve and Gurriel so that they were the ones who did something special in the offensive and ensure victory after the great work done by Verlander, who covered the entire route.

Verlander today pitched a heroic nine-innings, one run allowed and 13 strikeouts, allowing the Astros to have a 1-1 draw on the board and everything to decide in the bottom of the ninth.

That was the moment when Correa told Altuve that they had to do something in the closing to win the second game of the series that they dispute to the best one of seven.
“He told me, ‘OK, let’s do it,'” Correa recalled referring to Altuve.

This meant that Altuve hit single with an out on the board against Yanuis closer, Cuban Aroldis Chapman.

Correa, the next batter, connected a double to the center-right yard that rookie right fielder Aaron Judge managed to field in front of the wall.

The Puerto Rican came on second just before Judge’s shot and, in a surprise move, Houston’s third-place coach Gary Pettis sent home Altuve, who scored after a shot from the floor of Dutch torpedo player Didi Gregorius to the catcher Gary Sánchez.

“It was his decision and I think the best, because we all know that with Chapman pitching, maybe that would be the last unstoppable of the episode,” said Altuve about the last move and Pettis’ determination to send it to the plate.

“I think it was quite interesting to take the risk and thank God, we were able to win the match with that Carlos double.”

“He is the fastest runner in the American League,” Correa said. “I knew when I gave the ball that he had the chance to score.”

Correa every day feels more excited to be able to compete alongside a teammate like Altuve.

“It’s always the best feeling in the world, it’s always fun to win, but to win in the playoffs and in such an important moment is even bigger, I’m happy he could score,” said the Puerto Rican shortstop.

The Astros have been aggressive at the bases throughout the year, but the decision to send Altuve to the plate seemed unlikely when Gregorius’s shot came long enough to put out the Venezuelan.

However, the fact of forcing the Yankees – who in the end did not comply with the shot on the ground – was the difference in the play.

“For me, you rely on your players to make the plays and on your coaches to make the decisions,” said Astros pilot A.J. Hinch. “The third-place coach is the only other decision maker on this team. I love the aggressive mentality and I’ve always supported that with Gary.”

In addition to another excellent encounter of Altuve (4-2 and the record of victory) and the masterful work of Verlander, Correa stood out in victory Saturday.

The Puerto Rican not only took the decisive shot but also homered to produce the Astros’ first touchdown and did a great relay shot to get Brett Gardner to third base and avoid a three-pointer by Yankees outfielder.

“He had a great day,” Hinch said. “He is a player of great moments.He has seen this of him many times.He remains calm and in the strike zone.That is why he stands in the middle of our offensive order (like fourth bat) and is in the midst of many things we do well. ”

And, along with Altuve, he fulfilled the mission of rewarding the work of Verlander and putting up the Astros 2-0 in this series, with the third shock scheduled for Monday at Yankee Stadium.

“With these two boys we have luxury players,” said Astros veteran Carlos Beltran. “Correa is one of the best when he is without injuries and he showed it again, and Altuve is a batting champion.”

“We have two first-rate guys in our lineup, who we trust to be consistent. We are happy with their contributions and we are where we are for them.”

He has also shown important and decisive Gurriel with his opportune batting and when he doubled against David Robertson in the closing of the seventh episode, the Cuban put a new mark of the Astros when connecting of unstoppable in each of his first six matches of playoffs wearing the Houston uniform. The previous record was by Chris Burke, who got it in 2005.

Gurriel, 33, is in his first full season in the majors after deserting Cuba in February 2016 and signing with the Astros a few months later.

So far this playoffs, the first base hits 22-11 (.500) with two doubles, a triple, a score and a drive, which has made him another of the stellar and decisive players of the winning offense of the Astros.