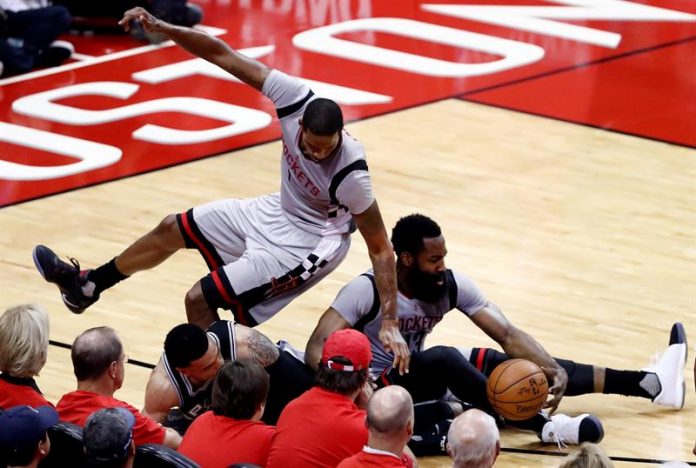 The Houston Rockets’ new stage with base pair Chris Paul and escort James Harden began brilliantly as they staged a real showing in the first friendly game they played in the preseason against the Chinese Sharks team in Sanghai.

The Rockets won by a resounding 144-82 to the Sharks and the forward of the Dominican origin Trevor Ariza, with double-double of 18 points and 10 rebounds was the leading scorer of the Rockets.

Ariza topped the list of eight players who had double-digit numbers, including five reserves, and ended the game with 60 (55-91) percent correct in the field and 42 (22-52) triple shots.

Guard Eric Gordon reached 17 points and was the Rockets’ sixth-best player (2-0) scoring 5 of 8 field shots, all three of them.

Swiss center Clint Capela was in charge of leading the Rockets’ indoor game with a double-double of 16 points and 11 rebounds.

While Paul, the Rockets’ star pick during the summer break, immediately took on the role of their new team’s team by getting a double-double of 11 points, 12 assists and four rebounds.

Harden, with all the offensive support he had from the rest of the teammates, stood at the doors of a double-double with nine points, 10 assists and two caps.

Brazilian pivot Nené Hilario became the perfect player in the Rockets’ attack by scoring 10 points with 5 of 5 shots in the basket, as well as capturing five rebounds, including four that were defensive in 10 minutes.

American base Josh Akognon, who plays for the Sharks, was the leading scorer for the Chinese team with 27 points, while his compatriot, forward Nick Minnerath reached 22 goals and captured eight rebounds.

The new Brooklyn Nets have been on the winning road since the season began with a 107-88 win over the Miami Heat and remain unbeaten in the preseason (2-0).

Base Jeremy Lin contributed 16 points and led a list of four players who had double digits.

While the Heat (1-1) again received the best offensive contribution from reserve base guard Tyler Johnson who had 21 points and nine rebounds, the same that captured center Hassan Whiteside, who also scored 19 goals.

Base Damian Lillard scored 16 points and led the Portland Trail Blazers’ 106-101-hit strikeout of the Toronto Raptors in what was their first win in the new preseason (1-1).

The Raptors (1-2), despite 21 points from base Kyle Lowry, could not avoid the second consecutive loss since the start of the exhibition matches.

The Spanish Congolese forward Serge Ibaka continued to lead the Raptors and in the 20 minutes he played scored two points (1-5, 0-3, 0-0), captured four rebounds and put a cap.

The Brazilians, forward Bruno Caboclo, who left the starter, and center Lucas Nogueira, who followed with reserve with the Raptors, both left without notation.

Power forward Aaron Gordon got a double-double of 17 points and 10 rebounds that left him at the head of the Orlando Magic attack that beat the Dallas Mavericks 112-89.

Rookie base Dennis Smith Jr. was in charge of leading the Mavericks’ 2-1 start since the preseason started.