The Dominican-born singer Cardi B continues to lead the Hot 100 list with the theme “Bodak Yellow (Money Moves)”, while “Despacito” remained in the fifth place in the main list of popularity of the magazine of Billboard.

The New York singer, the fifth female rapper to lead the Hot 100, remains steady at the top after 13 weeks on this list with her theme inspired by Floridian rapper Kodak Black. 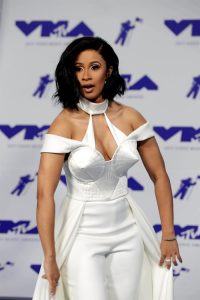 At the same time, Demi Lovato was in the top 10 after the song “Sorry Not Sorry” jumped from fifteenth to tenth place.

In Latin lists, Despacito, which is among the Latin Grammy nominees as Song of the Year, retained the top spot in three Latin Streaming Songs, Latin Digital Song Sales and Hot Latin Songs, where it has remained for 35 consecutive weeks.

The song “Hey DJ” from the CNCO group along with Yandel also gained a position, rising from the fourth to the third place.

Ozuna’s “Odisea” retained the top spot for the fifth consecutive week, while Shakira remained in the second for the second consecutive week with “El Dorado” on the Top Latin Albums “Golden” list of bachata Romeo Santos, fourth to third place, removing from that position Farruko’s “TrapXficante”, which fell from third to ninth place.

For the fifth consecutive week, Christian Nodal remained at the top of the Regional Mexican Albums chart with “Me dejé llevar”, the first studio album by the 18-year-old singer-songwriter who began composing at the age of 13.

Meanwhile, “I come to clarify”, from the group Los Fantasmas and Banda Populares del Llano continued in the second for the fourth consecutive week, while “El Karma”, by Ariel Camacho and Los Plebes del Rancho, retained the third by second week.

The White House has announced the call on April 22 of an international summit of leaders in which the United States will try to...

The more than 300 students who were abducted last Friday from a secondary school in the northwestern Nigerian state of Katsina have been transferred...

Air pollution affects 4 out of 10 in the US, according to study

Washington, - More than 40% of people in the US -141.1 million- live exposed to air pollution, putting their health and their lives at...

Casa Patas flamenco returns to Miami with “Binomio”, in its world debut

The flamenco show "Binomio", an "artistic conversation" between the bailaora Anabel Moreno and the bailaor and choreographer Francisco Hidalgo produced by the Casa Patas...