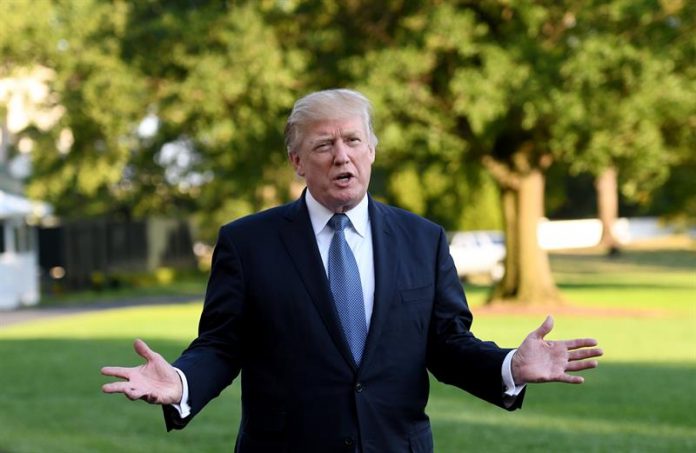 US President Donald Trump today criticized Puerto Rican authorities for their “poor leadership” in responding to Hurricane Maria’s devastating pace and said they “want everything done” in the face of a lack of electricity supply and serious access problems to fuel and water.

“A poor leadership capacity on the part of the mayor of San Juan and others in Puerto Rico who do not get their workers to help,” Trump charged in his Twitter account, a few days before his announced trip to the Caribbean island Tuesday 3 October.

The president lamented that the Puerto Rican authorities “want everything done when it should be a community effort,” while highlighting “the fantastic work of the 10,000 federal employees currently on the island.”

Trump, who will spend the weekend at his Bedminster (New Jersey) golf club, plans to talk on the phone with Puerto Rico’s governor Ricardo Rossello and the director of the Federal Disaster Management Agency (FEMA) , Brock Long.

Her statements come after the mayor of San Juan, Carmen Yulin Cruz, last night harshly criticized the interim Secretary of National Security, Elaine Duke, who stressed Thursday the good reaction of the federal authorities and described what happened as ” a story of good news. ”

“It’s not a good story when people are dying, going hungry, thirsty, when people can not go back to work. I do not know who in their right mind can say it’s a good story to tell,” stressed Yulin Cruz.

Impressed by these cyclones, Congressmen in the US have accused Trump in recent days of not giving sufficient importance to the situation and have acted slowly in Puerto Rico, where the electrical infrastructure has been totally destroyed and there are serious problems of access to food , fuel and water.

Maria, who joined the previous step of another powerful hurricane, Irma, days ago, overturned the island’s electrical system, where only 4 percent currently have electricity, and telecommunications towers, which only operate a 9 per hundred.

In this regard, the president gave authorization Thursday to foreign ships to bring supplies to Puerto Rico to favor supply.

Specifically, Trump decided to temporarily cancel the enforcement of a law known as the “Jones Act,” which states that only US ships with crew from the United States can transport goods between the country’s seaports.