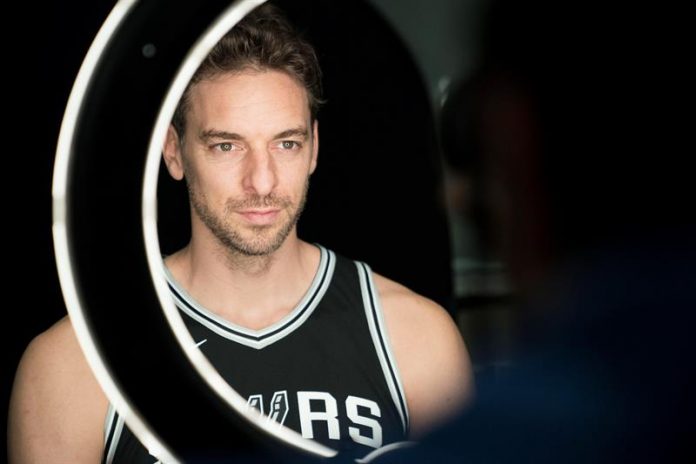 Spaniard Pau Gasol made his San Antonio Spurs practice debut to start what will be his second season with the Texan team and emphasized that his goals are none other than improving first year performance and helping the team be better.

“The great reality is that I came with a lot of enthusiasm and thought to improve even my contribution last year and above all continue to enjoy the great atmosphere that is given in this franchise,” said Gasol in his first contact with journalists.

The oldest of the 37-year-old Gasol brothers, who begins the seventeenth season in the NBA, reiterated that being in the Spurs franchise is a “luxury” and something very special.

“Let’s say that I have to be here with San Antonio, with this team, players, coaches, franchise and with a lot of desire to do well and to have a positive and big impact,” said Gasol, who last season averaged 12.4 points; 7.8 rebounds and 2.3 assists.

Spurs coach Gregg Popovich, the veteran Spurs coach, is also hoping to make it possible for the Spaniard to keep up with the San Antonio team that last July, the month of Sant Boi’s birthday, offered him a contract for three more seasons and $ 48 million, which somehow guaranteed him to finish his race in Texas.

“The Spurs knew perfectly well that my commitment to them was complete and the rest of the teams interested in signing me also knew that my desire was to continue in San Antonio so there were not really any serious conversations,” Gasol admitted.

While out of his remaining contract year, Gasol allowed the Spurs to get signings from power forward Rudy Gay, Brandon Paul and French forward Joffrey Lauvergne.

That is why Gasol himself was aware that he had to arrive in the best possible way and despite having played with Spain the Eurobasket, where he won the bronze medal with the national team, his physical condition, with almost five kilos less weight which last season is “excellent”.

“It’s true that I’ve been doing nine days of no specific work on relative rest training, but I feel good,” Gasol said. “The first day I had a lot of energy and energy.”

The oldest of the Gasol brothers said he had done a “little” of everything, as is usual at the beginning of training, but that comes very well and day by day will define the type of workload that will play them.

“From the basic principles of attack defense until you get a bit of rhythm also in the race,” explained Gasol. “I’ve really tried to find the feelings that the first one always leaves, in what is a little back to work after a time stopped at the level of the equipment”.

In this sense Gasol was categorical in pointing out that the first days of training are key in order to create from the start a little bit the identity of the team and what has to be the season for everyone.

Gasol defined as very complicated to the quality and potential that will be the teams that will be their direct rivals, while the reinforcements and losses generated within the franchise will show if they were for better or worse when the competition ends.

“We will see it, because I think that in the end the results are a bit that determine if you have taken a step forward or a step back,” analyzed Gasol. “What we have to do is work from the first day with all the players.”

In this sense, the best Spanish in the history of the NBA, reiterated that it was fundamental to try to make the first day within the team adaptation.

“That is why we must immediately try to adapt the new ones as soon as possible, while slowly recovering players who may have some physical problem and especially have a good start to the season,” said Gasol.

The Sant Boi player made specific reference to the French base Tony Parker, who is on the road to recover from a serious knee injury, and everything seems to indicate that he can advance his return to the competition for the month of November.

“I have not seen him train, of course, but he walks well, he looks good physically, which is very important, and of course I’m glad of his recovery and he’s being faster than expected, but in the end it’s clear that what counts is that when you come back you can feel good, you do not have problems and you fall into your injury, “analyzed Gasol.

As for the direct rivals that may have the Spurs, Gasol said the challenge this season will be greater because they have strengthened very well.

“They have done a lot and well,” said Gasol. “With players who are very hungry to try to win a title as it is and at least enjoy the best opportunity to do so and examples are Houston, and Oklahoma City, which have been strengthened.Minnesota is another team that has also been reinforced very well in the Western Conference. ”

The Sant Boi player was categorical in saying that all of them now have to take into account also of course of the Warriors, league champions, and in the Eastern Conference with Boston and Cleveland that have also been reinforced very well.

“In the end the competition is very high and the Spurs have to focus on ours, as are the players, the system and try to be the best we can for when the games arrive not only to win those direct rivals but also the rest,” ahead Gasol.