Frida, the dog that is popularized in stickers, books and dolls

In stickers, coloring books or worm puppets, the image of the dog Frida helps to raise funds for the victims of last Tuesday’s earthquake in Mexico, after the success she obtained in the rescue of people trapped in the rubble.

Frida, a 7-year-old labrador bitch with more than 52 rescues throughout her career, is the most famous of the Canine Unit of the Secretary of the Navy who has sought these days signs of life in buildings collapsed by the earthquake of 7.1 magnitude Richter in Mexico City.

The general euphoria aroused by Frida prompted young people from different regions of the country to use their image as a banner to request economic resources and thus collaborate with a “grain of sand” to the victims.

Students from the Technological Institute of Higher Education of the West (Iteso) of Guadalajara, from the western state of Jalisco, created a sticker with the image of Frida with her glasses, botitas and her Mexican Navy vest to achieve a marketing success.

“We felt impotence to not be able to help because from Guadalajara there is little that can do more than donate and carry food,” relates to Efe Jesus Degollado, an engineering student, who developed the idea with Sofía Ron, a student of audiovisual arts.

Social networks did their thing and in a few days Frida stickers have already reached thousands of buyers from some twenty Mexican states and countries like France, Costa Rica and Canada. 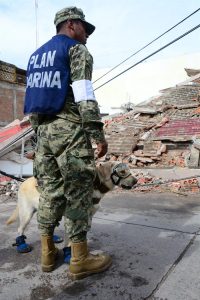 “Everyone felt identified because of this cause is the dog Frida and this need to help,” says Degollado in maintaining that he had “no idea” that the project became so popular.

The funds obtained by the sale of the sticker will be donated to Unired, an association of universities for the reconstruction of the areas most affected by the quake, he says.

In Monterrey, capital of the northern state of Nuevo Leon, the figure of Frida materialized in a doll of yarn created by a group of friends who are fans of the fabric that wanted to send “help in the distance”.

“It was impotent to want to help and not know how and (we believe) that Frida has become popular and has gained the sympathy of Mexico for the innocence and effort that a dog makes,” explains Orfa Alarcón, a member of the group “El crochet de the mars “.

Salvador García, a member of the group, wove Frida as the first figure of the dog, seated with her glasses and blue boots, and immediately received cheers in social networks.

The orders arrived by hundreds “and everything went out of control”, says Alarcón joyfully about the almost 3,000 messages received in a few days not only from Mexico, but also from the United States, Uruguay and Argentina.

They are already in the first phase to make 100 figures of two sizes and plan a second, which will take time because only five people know how to make them and it can take up to ten hours of work.

In the Mexican capital, dogs Titan, Eco and Evil joined Frida as protagonists of a coloring book developed by Lucie Torres and thus offer activities to children in shelters opened after the earthquake.

“We saw that the children in the shelters were bored, they were sad and we saw that they wanted books to color and I thought it would be good to put together one,” says Torres, a children’s illustrator who says he thought about this because he could not remove debris due to an illness in the kidneys.

His intention was to talk to the children about the telluric movement and its consequences and thought that the figure of rescue dogs could make an issue so “difficult” to tackle.

In the book, Frida, Titan, Echo and Evil tell children to help them through the “difficult times” and “do not forget to smile.” Each one also tells his story and how he acquired the ability to rescue people.

The idea is that the book is free and that anyone can download it. Thanks to the help of a workshop, it was able to print 2,000 copies that have been distributed in the shelters of Mexico City since last Saturday.

“We have known of several cases of children who are having post-traumatic stress. It is strong for the population of the youngest to have to face what happened, to assimilate and process it,” he says.

Obama, Bush and Clinton Volunteer to Get Publicly Vaccinated Against COVID-19

Biden applauds that the Supreme Court did not collaborate with Trump in his "assault" on democracy Promises that he will be "a president for all"...

A Florida court today permanently blocked the application of a law that establishes a waiting period of 24 hours before being able to perform...

Walt Disney today announced the physical and digital release this month of the musical "The Lion King," which screened for more than 20 years...

Wall Street opens in green and the Dow Jones climbs 0.38%

New York, .- Wall Street opened this Friday in green and the Industrial Dow Jones, its main indicator, rose 0.38% amid a renewed optimism...