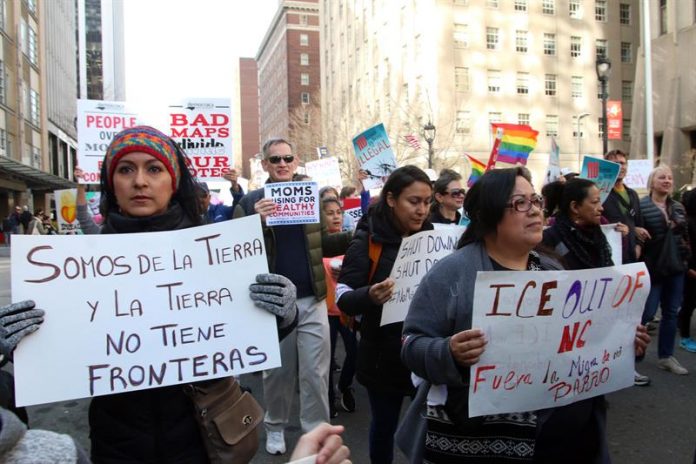 The overwhelming majority of Hispanics disapprove of President Donald Trump’s policies and considers it vital to approve comprehensive immigration reform and the Dream Act to protect “dreamers,” according to a survey released today.

“Throughout the demographic (sample) we see a great disapproval of the Trump presidency. Seventy-six percent of Latinos disapprove of President Trump’s work and 59% think he is doing a worse job than expected,” said Trump. said Matt Barreto, co-founder of Latino Decisions, at a national news conference today.

This group, along with Latino Victory Project, conducted this survey of 755 Hispanics, not all registered voters, in which it is clear that the president’s work remains unconvincing to the Latino community.

In this way, 68% think that the country is going in the wrong direction, by only 32 who think it does it right.

The disapproval figure is much higher than the general population, which is around 56%, said Barreto on the results of this survey, which took place between 12 and 19 September and presents a margin of error of 3.57 percentage points .

And the negative perception of the Hispanics surveyed is equally projected toward the Republican Party, which does not get rid of the negative view.

“70% of Latinos think Republicans are hostile to Latinos or they do not care,” noted Cristóbal Alex, president of Latino Victory Project.

In a joint teleconference to present the results of the survey, Alex also noted that 41% of respondents think that “the Republican Party is so hostile to Latinos that they will never vote for Republicans again.”

Tom Pérez, chairman of the National Democratic Committee (DNC), emphasized during the teleconference the existing perception of the distance between Republicans and Hispanics.

“What we see today is more evidence that the Republican Party is disconnected from Latinos,” Pérez said, noting that this group “continues to try to remove health care from American families.”

The poll also showed the Latino disapproval with the recent pardon granted by Trump to former Maricopa County (Arizona) Joe Arpaio, who was facing up to six months in prison after being convicted of contempt of court for a discrimination case racial.

“Hispanics are frustrated by racist policies and 82% are opposed to Arpaio’s pardon,” Barreto said.

The poll also found that 64% disapproved of the way the president reacted to the violence unleashed by last month’s white supremacist march in Charlottesville, which resulted in a dead person.

The analysis found that for 53% of respondents the “most important issue” is immigration reform and the Dream Act bill, which would allow “dreamers” to obtain permanent residence, followed by “racial relations / discrimination” (25%) and the economy and the health system, both with 15%.

Alex highlighted the growing power of the Hispanic vote, because in the November 2016 election, 25 percent of Latino voters voted for the first time, though the presidential election was eventually won by the Republican candidate.

However, the activist said that the enthusiasm of the new Hispanic voters can make a difference in the legislative elections of 2018.

“In fact we believe that the House (of Representatives) could turn around” and to happen to have a democrat majority, said representative of Latino Victory Project.

For Perez, the country’s Hispanic voter community needs to turn the slogan of “our vote is our voice, our numbers are our power,” after the Latino vote did not help win its White House candidate in 2016, Hillary Clinton.

However, the Democrat assured that his party “will continue with its mission of approaching the Hispanic community and guarding the backs of Latinos.”

“We have to do the job of organizing Latino communities to empower voters and make sure they know the importance of voting,” Perez said.

In this objective, Alex considered that the president’s policies can make of Trump the greater “Latin organizer of all the times”.