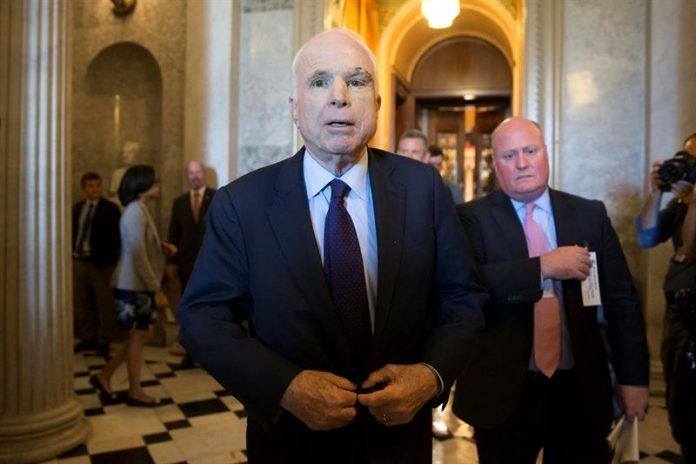 President Donald Trump today signaled to John McCain that he is still responsible for Obamacare, the same day that the Arizona senator announced his opposition to the new Republican proposal to overthrow the health care bill by former President Barack Obama .

Trump was in Huntsville, Alabama, at a campaign rally by Senator Luther Strange, who next Tuesday is counting former Republican Roy Moore in a Republican primary where he is disadvantaged by polls and first-round results.

The president explained that during the last Republican attempt to overthrow Obamacare in July his advisers gave him a list of 10 Republican senators whom he had to press because they could oppose the initiative.

“John McCain was not on the list, so that was unexpected. Frankly terrible,” Trump exclaimed to thousands of supporters who booed the Arizona senator.

The president confessed at that point that he had to invite many of the senators on the list to dine at the White House with their families and then take pictures with them to get them to finally vote in favor of their own party proposal.

Despite opposition from the veteran Arizona senator, Trump predicted that “ultimately” Republicans will be able to overthrow Obamacare.

The Republicans this week presented their umpteenth attempt to pass a bill that would dismantle the current health care bill that Obama pushed.

McCain announced his opposition to that bill, drafted by Senators Bill Cassidy and Lindsey Graham, the latter’s friend of the Arizona senator.

A few months ago, McCain, shortly after being diagnosed with a brain tumor, also derailed another of Republican proposals to end Obamacare, joining the senators of his party Susan Collins and Melissa Murkowski, who also voted against.

Earlier proposals from conservatives would have involved 22-32 million uninsured people in the next 10 years, according to the non-partisan Congressional Budget Office (CBO).