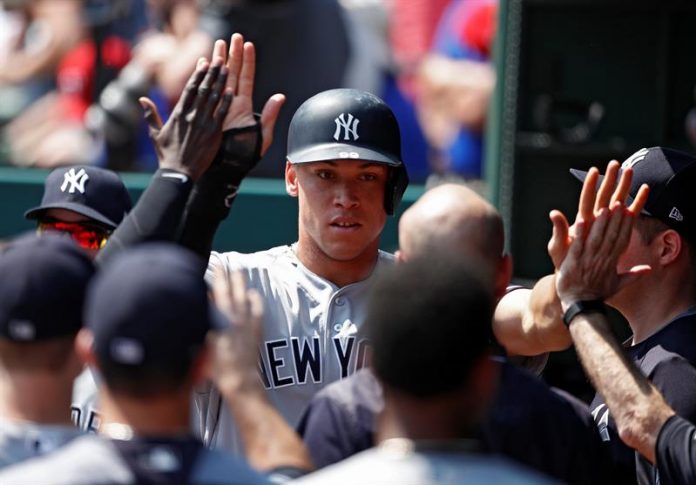 Rookie outfielder Aaron Judge hit the 44th homer so far this season and Cuban closer Aroldis Chapman secured a 2-1 win over the New York Yankees against the Minnesota Twins in the fight for the wild cards of the League American.

Todd Frazier broke the tie with a sacrifice fly in the sixth, and Mexican starter Jaime Garcia shone from the mound to the team that passed him this year after just one opening.

The Yankees (83-67), still on the hunt for leading Boston in the Eastern Division, won the first of a three-game series that could be the breakthrough of a two-week final in the American League.

The New York team leads the fight for the first wild card, with a difference of five games and 12 to play.

The Twins (78-72) occupy second place, a game and a half ahead of the Angels of Los Angeles, who had a day of rest.

If order is maintained, New York would receive the Twins in a life-and-death game on October 3.

Chapman replaced uncontrolled reliever Dellin Betances with bases loaded and one out in the eighth.

The Cuban left-hander struck out Joe Mauer, who had hit a grand slam the day before, and third-bas by Byron Buxton with an easy raise. Chapman used four pitches, all of them at least 100 miles per hour (160 kilometers).

Chapman also took the ninth, pulling him 1-2-3 for his 19th save in 23 chances. It was his third save of at least five outs in the regular season, and the first since August 2013 with the Cincinnati Reds.

He also pulled one out of that extension in the World Series last year with the Chicago Cubs.

Judge threw the ball in the first episode against Dominican starter Ervin Santana (15-8), who had won all four of his previous decisions.

The Dominican right allowed seven hits in five innings and two-thirds and loaded with the loss.

The victory was for reliever David Robertson (9-2), who retired the four batters he faced. He is 5-0 since the Yankees brought him back to New York after a transfer with the Chicago White Sox last July.

Garcia struck out five of the first six batters he faced and did not allow a clean run in five 2/3 innings. He finished with nine strikeouts, equaling his highest total of the campaign.

The Mexican starter was traded by Minnesota to the Yankees at the end of last July, a day after a 6-3 victory in Oakland against the athletes, in his only opening with the Twins, and the only one of the team during a period of eight games .