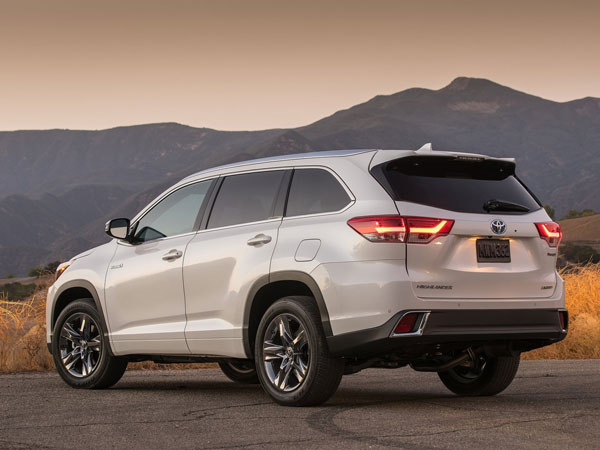 For many American families, the Toyota Highlander is their family car of choice. Designed to accommodate up to eight people, as long as two of them are children, this midsize SUV crossover provides comfort, safety, utility and now with its hybrid version, something that many families are looking for, few expenses.

With the passage of the two monumental Harvey and Irma storms, gasoline prices have risen, and again hybrid and electric cars begin to appear more attractive. To keep it in good spirits, Toyota has made this year a retouch to its appearance, accompanied by mechanical and safety improvements, to ensure that the Highlander keeps high on the SUV shopping lists, while a new version arrives within two or three years.

The highlight of the changes? A new V6 engine, balanced with a premiere automatic transmission, two new finishes for the Hybrid range, and a host of new driver assistance and collision avoidance technologies offered on a standard basis.

I had driven a Highlander a few years ago, but it was the first time I spent time with the hybrid version. Although the conclusions almost always go to the end, I do not hesitate to affirm that this is one of the best SUV on the market. Due to its combination of excellent space, performance, durability and excellent comments from the press, the Highlander has been awarded a fair amount of awards and recognitions.

Despite having a new powertrain, the difference in handling with last year’s model is hardly noticeable when we drive it. The new 8-speed transmission does a better job, and does not seem to have difficulty choosing the gear required at any time. The new V6 under the hood of the 2017 Toyota Highlander puts more power and torque than its predecessor. In the city or on the road, the suspension behaves soft and creamy, able to overcome the bumps left by the winter on the road, without the creature in the back seat awakens from his deep sleep.

The Hybrid Highlander we tested, also benefits from the new V6 engine, and with a combined total of 306 horsepower, it is actually the “hot rod” alignment. Although we are looking at this model today, it would not be too much to recommend that you ignore the entry version, the Highlander LE, which still uses a 4-cylinder engine, which does not justify the low fuel savings with the sacrifice in power .

Good performance on crash tests and a portentous list of standard safety features, including a pre-collision, pedestrian and vehicle detection system, and adaptive cruise control make the Highlander a safe car. The Highlander Hybrid achieves class-leading fuel economy without sacrificing power. It has fast acceleration and possesses more horsepower than its gas counterpart, all while reducing its carbon footprint.

The average consumption of a medium-sized SUV is between 19 miles per gallon in the city and 25 on the highway. In the case of the Hybrid Highlander we are talking about 29 miles in the city and 27 on the highway, without doubt the best behavior for a car in its calase. You could save up to about $ 350 in fuel costs per year, if you decide on the hybrid version instead of gasoline.

Despite improvements in equipment in the engine train and the addition of more standard safety features, the price of the Toyota Highlander 2017 did not change much. The base version of the 4-cylinder Highlander LE costs about $ 31,500, including destination charges. A V6 will add approximately $ 2,000 to that price. At the other end of the lineup, the V6 Limited Platinum AWD starts at $ 47,200. If we talk about the Highlander Hybrid lineup, prices range from $ 37,200 for the LE base to just under $ 49,000 for the Limited Platinum version, which, though it seems unlikely, is about $ 2,600 less than last year. Those prices are in line with competing mid-size SUV models such as the Honda Pilot, Volswagen Atlas or the Nissan Pathfinder.

The decision to buy a new SUV is one that goes through the whole family. Toyota makes it easy for those who are thinking more about saving and contributing to the well-being of the planet, with more options in the hybrid alignment, able to accommodate different budgets. The Highlander clings to the philosophy of the brand. Toyota does not like the spectacular. It is an SUV with comfort, technology, savings, performance and reasonable carrying capacity and most importantly, with a prudent price. There is a notorious brand in almost all the evaluation boxes, so this medium SUV is at the top of my preferences.